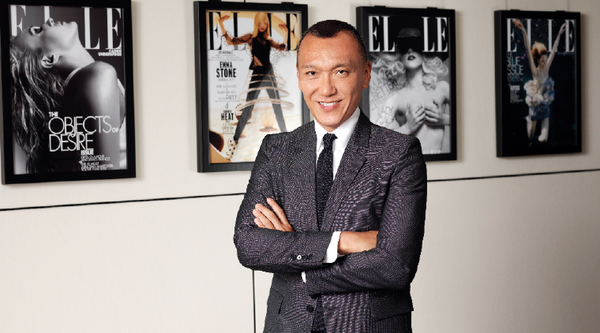 (NEW YORK) In the past six months, one-man multimedia platform Joe Zee redesigned Elle, launched a new reality show,  founded a fashion summer camp, and styled half of Hollywood. Is he making the rest of us look bad? Kind of! Is he redefining  what a creative director can be? Elle yeah, he is!
BY EDDIE ROCHE

We barely have time to dress ourselves properly. How do you do it, Joe?
Sugar-free Red Bull! My friends call me the Energizer Bunny because I get very excited. I think I’m actually better at juggling twelve balls instead of one.  Maybe that’s the ADD in me, where I’m better and more focused when I’ve got lots going on. But everything I do has touch points with everything else. Whatever I work on outside of the office comes back and benefits the magazine.

What’s your secret?
I wish I could say it was time management, but I’m the worst at that. I’m a procrastinator. My boyfriend is always screaming at me to get organized. I don’t sleep a ton. I wasn’t lying about the Sugar-Free Red Bull!

How many hours do you get a night?
Maybe five? I went to bed at 1 a.m. last night and got up a bit before 6.

Whoa! How do you start your day?
Multimedia overload. I turn on CNN and then go back and forth between The Today Show and Good Morning America. I’m also on my computer reading all the blogs and the news from the night before. I read Twitter and check out everything from Deadline to Politico to AOL to Huffington Post to The Daily Beast. I’m having my coffee, feeding the dogs, and trying to do everything before 9 a.m.

Do you have ADD?
I’ve always thought I did, but I’ve never been diagnosed. I like to self-diagnose. In between being busy, I’m googling Web MD.

What’s the first magazine that gave you a rush?
During high school in Toronto we used to have a spare period of no class and I’d sit outside of my locker on the floor with my Vogue and my Elle side-by-side. I’d read them from cover to cover, and I’m not kidding about that. I’d read and study every ad, every piece of text, the copyright information, the masthead—literally, everything. People on the mastheads became my imaginary friends. I’d notice if they got married, or if so and so didn’t work there anymore. I’d look at the fashion and try to identify the designers and the photographers. I wanted to live that life.

When was this?
It was the Grace Mirabella days at Vogue. There were all those Richard Avedon covers with those amazing girls with their head shots, and then you’d have the Elle covers that were so bold and daring and in-your-face. As time progressed, I realized that I didn’t just love the photography; I loved media and the stories it told. That’s what I loved about magazines back then. They were a storytelling device.

All these years later, how does it feel to ride up the Hearst escalator every morning?
Usually I’m so crazy and busy and rushing in and out, but there are still moments when I step back and pinch myself. I’m doing more than I ever dreamed! People say I have such an amazing job, and I know I do. I never complain. I’m not part of that group of people who say they have too much to do or gripe about having to go to Europe again. Sometimes, our industry can be encouraged to complain. I always feel like fashion is staffed by all the kids who were bullied when they were young. Here’s a place where you can be celebrated!

Does the schedule exhaust you?
Of course, but what am I exhausted doing? I’m not lifting heavy loads. I’m not doing hardcore labor. I’m running around going from fashion show to fashion show in a nice car, in a beautiful city, and eating nice food. I might go to 10 shows a day, but each one of those designers worked on their show for six months! If I’m not paying attention, it’s not fair to them. You need to be alert so you can see with an open mind.

You’ve had quite the busy year. What are you the most proud of?
I’m proud of what we put on the pages every month. Every single month we try to be better than the month before. It’s so important to not just fall into a formula and keep going. I’m not comfortable with that. I’m still that kid who can’t wait to get that magazine every month and rip it open and be delighted. Does it always work? No, but I’m constantly trying to evolve.

Obviously, the photographers you work with are a huge part of your success. Who have you worked with the longest?
Carter Smith, who shot the cover of our September issue. He’s the second person I met when I moved to New York in 1990. We went to FIT and I got there and wanted to work on the school newspaper. I was one of only two people who showed up for the information meeting; the other was Carter. Nobody else wanted to work on it! We bonded over our love of magazines.

Who else do you like to work with?
Thomas Whiteside is a photographer who we first took on when we redesigned Elle in 2007, and I worked really hard with him. Now he’s shooting covers for us. I also love to work with Arthur Elgort, who’s been a longtime contributor at one of our competitors. To see him in our pages is such a great thing. The walls of the industry are slowly starting to come down because it’s just about great talent being able to do great work, wherever they are.

What’s your relationship with Robbie Myers like?
We’ve been working together since January 2007. We go way back to when I finished FIT in 1992 and I was telling everyone that I wanted to work in magazines. Everyone was telling me those jobs are gold and nobody leaves. I was also told that I’m not a woman and not a blonde. I sent out my resume to 17 people and got 16 job interviews. One of them was at Seventeen and the managing editor at the time was Robbie. I remember meeting her and I was so impressed with how smart and beautiful she was. I didn’t get a job there, but I never forgot it.

Do you complement each other?
She has a lot of vision. She always wants to try something new. You have to give credit to someone who runs a magazine and is willing to take a risk. That doesn’t happen in a lot of places. Everyone says this is the thinking women’s fashion magazine, and I don’t disagree.

What designers are exciting you these days?
I always love young designers. The problem, and I’ll take some of the blame for this, is that we are so fast to want to grab on to that story, so the minute they graduate from Parsons we want to latch on to them and say this is the second coming. We aren’t giving young designers enough time to breathe and develop who they are. Are we just setting them up for failure if we are hailing them as the nextbig thing with so much pressure to deliver?

What else is in the pipeline for you?
I have a book coming out next September. I’m not calling it a memoir because then I just feel old, but when you’ve been doing this for more than twenty years you’ve got some funny stories. My inspiration was Tina Fey’s Bossy Pants. It’s not going to be one of those “I grew up here…” kind of books, because nobody cares.

What would you still like to do?
Write a cookbook? I had a very clear-cut plan for one fifteen years ago, and then everything kind of detoured. I’m just letting things come. I’m open.