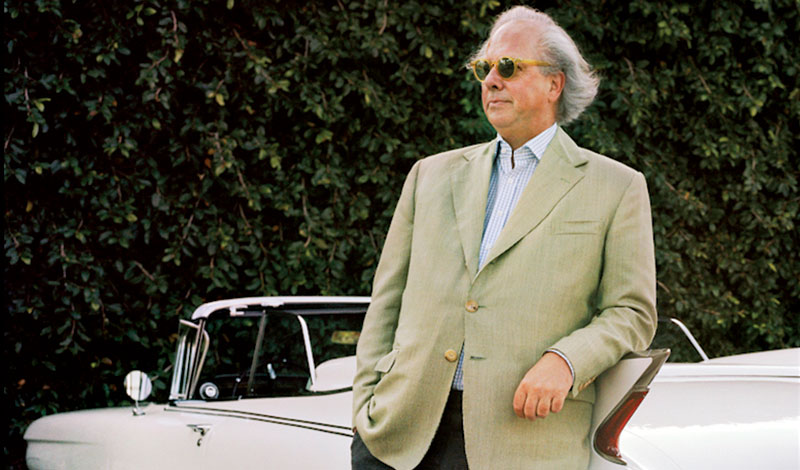 Between that smokin’ Natalia Vodianova cover shoot, the Isabella Blow/Lee McQueen excerpt, and that hotly debated best-dressed list, Vanity Fair’s September issue was a feast of fashion delights. Editor Graydon Carter talks us through his recipe. BY EDDIE ROCHE

How do you pack a comprehensive look at fashion into one issue?
We focus in large part on people who have an enduring sense of style. Natalia Vodianova, whose sense of style goes right to the heart of how she lives her life, is a perfect example. She’s got an incredible story, only parts of which I knew. It’s been a long journey from where she came from in Russia to where she is now, and I like that story. It’s very uplifting. The people that Mario Testino shot for the best-dressed list are people who have developed their sense of style over the years, often in the public eye. It’s not easy, but I have a strong team behind me.

Why was Natalia so intriguing?
I’ve known her on and off for the past 10 or 12 years—we donate invitations to the Oscar party to her charity—and had a dinner earlier this year for her and Antoine [Arnault] when they opened the first Berluti store in New York. She’s just an incredible and engaging woman. She’ll have an important career way beyond modeling. We always look for a person who has a story behind them—not everybody has one—and also somebody who is attractive, both visually and emotionally. She certainly fit the bill.

You’ve said in the past that you’re not much of a fashion guy. Did you learn anything putting the issue together?
A few things. That I should be wearing hats more, for starters. They’re doing wonders for Pharrell Williams. The smart people choose a few things each season to compose something for themselves that will endure. I don’t change the look of my clothes that much from decade to decade, but I’m not young. I have great admiration for designers. With the amount of staggering images flooding the Internet every day, it’s very hard to keep abreast and stay original.

What kind of hats?
Actually, scratch that. I look crappy in hats.

Do you make suggestions for the best-dressed list?
Oh, yeah! I see it right through to the end. A large part of it is a secret meeting with a lot of mystique, but a part of it is very open to the public as well, now that people can vote online.

Why?
Some get on there through politics in one form or another, and you look at them and think, “This person has absolutely no style.”

How has the list evolved?
In the past, there were a lot of socialites and people who did not live in the public eye. Increasingly, the list includes people the readers relate to, and those are often in the film or music business. You don’t see a lot of writers on the best-dressed list, because they’re more private individuals and not part of the ongoing parade.

Do people try and schmooze you to get on the list?
They don’t do it to me, but there are some people who will try and politic for themselves and talk to the other members. I get almost no coercion during the year.

That surprises us.
Me too.

Who came up with the idea to shoot the portfolio subjects in daytime looks?
Mario Testino and Jessica [Diehl]. We did something similar last year and thought it was a fresh way of shooting people in a contemporary setting. The readers are used to seeing paparazzi images instead of highly styled fashion photographs. Most of these people are not models, and we put them in a rough approximation of their element. I think it works quite well.

Does anyone ever ask to be taken off the list?
Occasionally, but that’s rare. When I was on it in the ’80s, a friend of mine called me from Madrid and they had read about it in The International Herald Tribune. I was at Spy at the time, and I didn’t want to make a big deal of it, but secretly, I was quite tickled.

Edward Menicheschi is leaving the magazine to head up his own sales division. How do you feel about that?
I feel terrible. He’s a phenomenal publisher, and I loved having him as a partner. He’s the fourth Vanity Fair publisher to go on to run group sales, in fact. I guess it was only a matter of time before it happened. If it had to happen, the last couple of weeks of August was the best time because it’s quiet. I’m not going to rush into anything with the next publisher. We’ll announce soon.

Page Six suggested that Vanity Fair commissioned a controversial story about Dolce & Gabbana. Was that intended for the September issue?
It would have been perfect for September, but it wasn’t fully scheduled. It was going to run sometime this fall. I wanted to wait and see what the judge said about their future, so it’s on hold for now. We have probably 30 or 40 different stories on hold at any given time.

Were you annoyed it was leaked to Page Six?
Of course. I think the Dolce & Gabbana people leaked it.

How would your describe your personal style?
Boring and conservative. I wear the same clothes to work every day: a pair of gray flannels and a blazer of some sort.

Thoughts on shorts to the office?
I love shorts! If you’re a man and you’ve got the legs, go for it.

What about the no-socks look? We hear you’re not a fan.
Those guys at GQ have lovely ankles and I think they should show them off. My particular bugaboo is actually open-toed shoes for women. There are some women who can do it, and some who, well, shouldn’t.

What’s your favorite issue to put together?
That’s like talking about your favorite child. The October issue is a particular favorite of mine, because it’s about the New Establishment and business. But each issue has its own challenges. Thin issues are more challenging because you have fewer pages to try to tell all the stories. Thick issues are a challenge because they’re filled, and it’s a big issue to close!

Do you read any September issues aside from your own?
I’ll probably leaf through most of them soon. Vogue is the grand mommy of all of them, but they all do a highly ambitious job.

Thoughts on Condé Nast’s impending move?
Love it. I spend about eight seconds in Times Square every day, so it’s not like I’m going to miss anything there. I live downtown and I can see the [One World Trade Center] building from the end of my block. The new downtown area is going to be like Rockefeller Center for the next century. It’s quite something.

Will you have a bigger office?
It’s about the same size, but I’ll have a view of the harbor, which will be pretty exhilarating. It’s a whole new world. The building I do miss is 350 Madison. The Oyster Bar was down the block, with Brooks Brothers on one side and Paul Stuart on the other. It was perfect.