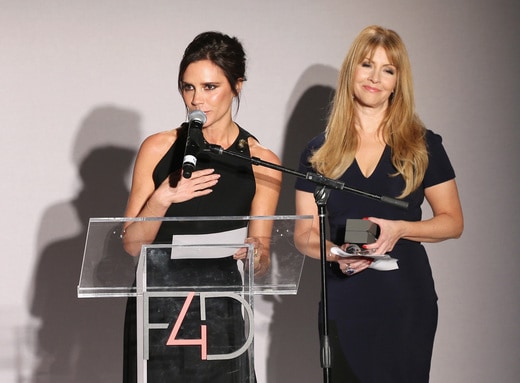 Each year during the UN General Assembly, Fashion 4 Development hosts its “First Ladies Luncheon,” and this year was one for the books. Guests at the Pierre Hotel in New York City yesterday included political influencers and diplomats from over 100 countries, who joined forces with leaders in the fashion industry to support the greater good of women and children, worldwide.

The day began in the Cotillion Room with a Guo Pei installation of Chinese haute couture design from the ever-popular Met exhibit “China: Through the Looking Glass,” before the ceremony kicked off with with a welcome note by Evangelou. Honorees included Beckham, for her role as Goodwill Ambassador on behalf of UNAIDS, and her efforts in Africa and Asia to raise awareness of HIV and AIDS. “I am humbled that my contribution to raising awareness for HIV and AIDS related challenge, has been acknowledged in this way,” Beckham said. “I believe if we empower women and educate the next generation we can truly believe in an AIDS free future.” Later on, Kruger and Gery Keszler presented the League of Gentlemen Award to The Global Fund’s CEO Mark Dybul, and Campbell received recognition for her work fighting Ebola through Fashion for Relief.

Fashion 4 Development was started in 2011 by Evangelou as a media platform to support the UN Millennium Development Goals. It’s since expanded to 20 countries.

Milan on the Street: 20 of the Best Looks