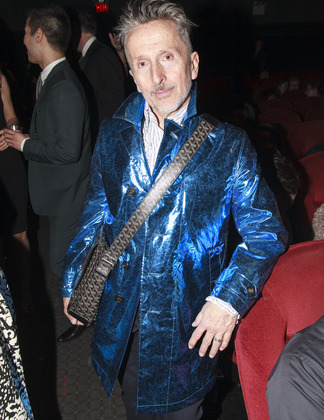 (NEW YORK) The cream of the fashion digital media crop gathered at the SVA Theater for the fourth annual Fashion 2.0 Awards.  Created by Yuli Ziv, the founder of Style Coalition, the accolades pay homage to fashion’s finest techies.

It came as no shock that DKNY was bestowed with the award for best Twitter. Aliza Licht’s DKNY_PR Girl has garnered her 434,936 followers and counting. And the other digital media mavericks that took home awards? Marc Jacobs for best Facebook, Anthropologie for best Pinterest (a new category this year), and Saks POV for best blog. Later on, Rent The Runway founders, Jennifer Hyman and Jenny Fleiss were honored with the second annual Fashion 2.0 Visionary Award in acknowledgement of their site’s epic achievements. “You have to be a little bit crazy to risk it all and be an entrepreneur,” Hyman said. “But I think that it’s paid off and we’re really excited and so thankful and appreciative to be here.”

The key note address was delivered by Barneys creative ambassador-at-large, Simon Doonan, who arrived at the theater donning a metallic cobalt blue rain coat. As for his two cents on the conversation du eve? “Thanks to social media, many more people are walking down the street in a distracted fashion and as a result of not looking where they are going, they are treading in dog poop. This is a good thing because it makes me laugh and it’s also great for shoe sales at Barneys.”

Doonan then mused on gender and tech obsessiveness. “I think women enjoy social media more than men because women love to communicate. I hate to communicate. I used to love it when you’d go out disco dancing and no one spoke. Now people don’t shut up! They should all be dancing instead of talking.”
RACHEL BERNSTEIN