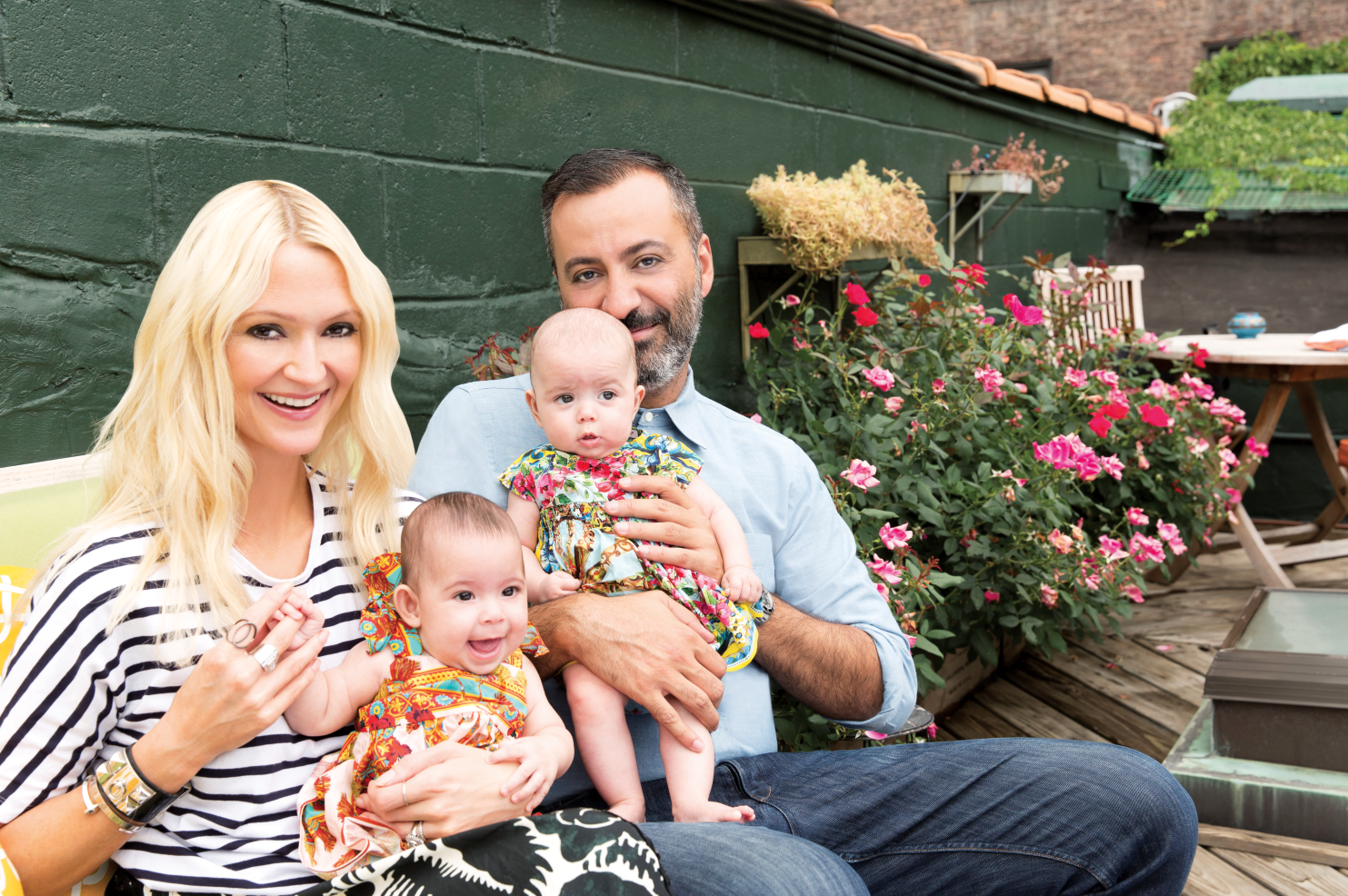 Marie Claire’s Zanna Roberts Rassi and Milk Studios’ Mazdack Rassi are one of the industry’s most beloved power couples, and now with the addition of their twin girls, Rumi and Juno, they’re packing an even more fashionable punch. The Daily dropped by their Chelsea abode for an early look at the next generation.
BY EDDIE ROCHE

How old are the girls?
Mazdack Rassi: Almost five months!

Congrats to you both! How has parenting changed you?
Zanna Roberts Rassi: We’re more efficient! Rassi and I spend even more time together, because when you’ve got two babies, it’s impossible to manage on your own. We’re working just as much.
Mazdack: But we cut out the bulls**t, because we care about our time a lot more. Everything we do, we really think about. We used to go out so much—there were so many dinners—and now, we’re more edited.

How are you sleeping?
Zanna: We’re kind of cheating the system—the girls are sleeping through the night all due to our amazing live-in nanny, Karen.
Mazdack: You can’t mess around when you have twins! Things are very organized and efficient, military-style. You know when they say, “Take all the help that you can get!”? That’s the greatest advice.

How did you pick the girls’ names?
Zanna: Rumi was named after the Persian poet. We had a Rumi poem read at our wedding and Rassi is Persian. Juno is named after the Roman goddess. She’s the goddess of all gods and the protector of the Empire. Juno is also a character in Star Wars and the name of a NASA spaceship, so that’s how I sold that to Rassi. We liked other names, like Matilda, but she just didn’t fit a very girly name. I would have loved a traditional name like Alice, but she just wasn’t. It also had to fit with Rumi, which is such a strong name. They both have incredibly lofty names to live up to. No pressure, girls!

Twins are their own thing!
Zanna: Just this morning I was saying I never thought I had that much love to give. It’s unbounding. They’re hysterical and so different already. Rassi can explain this better than me!
Mazdack: They aren’t identical; they’re fraternal. It’s exactly like having two sisters at once. Rumi is just a baby; Juno is super serious and looks at us like she’s thinking about college already. She wants to know how we’re doing financially, and that we’re okay. Do we have a roof? Do we have a car?
Zanna: She judges us!
Mazdack: They are just starting to acknowledge each other and figuring out, “Is this competition? Is this friendly? Or is that myself in the mirror?”

How else has life changed?
Zanna: The amount of stuff we need! I remember the first trip to Baby “R” Us—we were buying four of everything because we have a place in the country, too. My wardrobe now pales in comparison to theirs.
Mazdack: So many wonderful people send us gifts. We’re still getting them from our dear friends in the business.

The girls look very cute in their Dolce & Gabbana dresses…
Mazdack: They came from a dear friend of our family, Lewis Katz, who passed away recently. He was a mentor and my best friend’s father.
Zanna: The girls are going to keep those dresses forever.

What are their other favorite brands?
Zanna: The baby Burberry stuff! Mommy’s addicted to a website called Mini X Style. It’s like Net-A-Porter for kids.
Mazdack: The baby Armani stuff is unbelievable, but they also wear a lot of Baby Gap.

Are they ready for their first Fashion Week?
Mazdack: We timed it so we had them right after last Fashion Week.
Zanna: If that was the case, I wouldn’t have been so sick around this time last year. I couldn’t tell anybody I was pregnant, and I was going from New York to London and then to the Emmy Awards [practically] vomiting on Tom Ford’s feet while I was interviewing him. It was the worst.

What’s your role at Marie Claire now?
Zanna: I’m freelance and on contract as senior fashion editor, but I’m also the E! news fashion correspondent. My Fashion Week will be chaotic. I’m going to London to shoot for Fashion Police right after New York.

How’s the Oscars red carpet?
Zanna: I love it! Doing the awards ceremony is so much fun. We’re there for two days and all get rooms in the same hotel—it’s like Camp Oscars. To be a part of something so iconic, I can’t believe I’m so lucky to be there. It’s a dream come true.

What’s new with MADE this season?
Mazdack: It’s our fifth year, so our 10th season. We have lots of great designers—a big one is Public School, which people are dying to get into—and the usual crew like Peter Som and Cushnie et Ochs. There are lots of CFDA Award nominations from our crew, so we’re really proud. We don’t really look at them as fashion designers—they’re artists who also touch music and photography—so we think of it as more of a cultural celebration than a fashion week. The other day, someone called MADE “the establishment,” which kind of freaked us out. We were supposedly the downtown kids!

Will we see the girls at MADE?
Mazdack: MADE is all about the next generation.