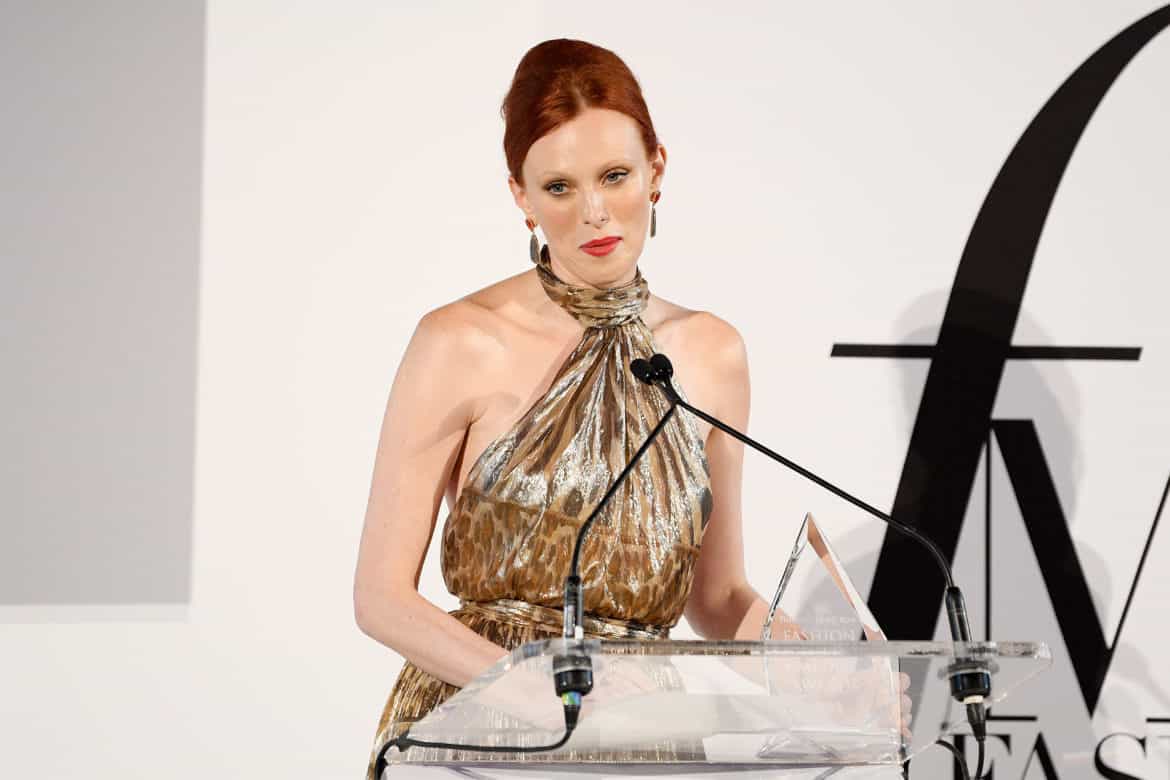 Not only is she one of the most iconic and beloved models of our time, Karen Elson is a force to be reckoned with. The Nashville-based powerhouse has been tirelessly fighting for the rights of models and promoting new ways for the industry to evolve. The Daily got on a Zoom with her to find out what’s driving her and why she’s feeling better than ever.

We consider you such a fearless person! Were you as outspoken and honest as you are now when you were a teenager?
I don’t think I was. Something I’ve learned over the years is how to advocate for myself. It was funny, my brother sent me, a few years back, an old report card, and it said that I had “a keen sense of justice.” I think I’ve always known right from wrong, and always had a strong sense of when people are being mistreated. I can see it clearly, and I’m not down with that. That was always the same from when I was younger, but I didn’t advocate for myself when I was younger. In my early years of modeling, I definitely wanted to be good at my job and I wanted people to like me. This is the thing with models; a lot of us are coming from difficult circumstances and we’re plucked from obscurity from complicated childhoods and lives, and thrust into the grown-up world, but we don’t ever want to go back to where we’re from. It’s the perfect breeding ground or primer for us not to ask questions and to take whatever is thrown at us, because if we don’t, say, comply with what’s asked of us, we could go home.
What were your first steps to start doing something to create change in the business?
Working with the Model Alliance and, in my own small way, giving them my opinions on what they do and how they advocate. That definitely had an impact because it was the first time when there was anything like that in fashion. The Model Alliance definitely opened my eyes to the fact that there were people speaking out about the things that I thought. Every model I know, we have all had these deep conversations about how we are treated at work and how we’d like to be treated better, and how we’d like this business to be a lot more pro-model, other than us feeling, surprisingly, like an afterthought or that our well being and emotional needs are secondary to us just showing up on set and doing a good job and everything else will work out. I don’t always enjoy being the brow-beating person because you get a lot of backlash, too. It’s been a real battle to advocate, not just for myself, but for other people in this business because it doesn’t come without its retaliation.
What else does the Model Alliance do?
They’ve helped young people who’ve been had by modeling scams, who’d given thousands of dollars, shown up to a shoot and been sexually harassed or assaulted, and then never found a model agency. They’re working with some of the worst-case scenarios in the industry, and I think sometimes the models, they see that and think, “If I give my name to this cause, people in the business are going to think that I’m difficult.” Even though, behind closed doors, every model I know has talked about the same stuff, whether it’s body dysmorphia, to agents not paying, to not knowing what fee you’re getting when you walk on set, to walking on set and people asking you to get naked. 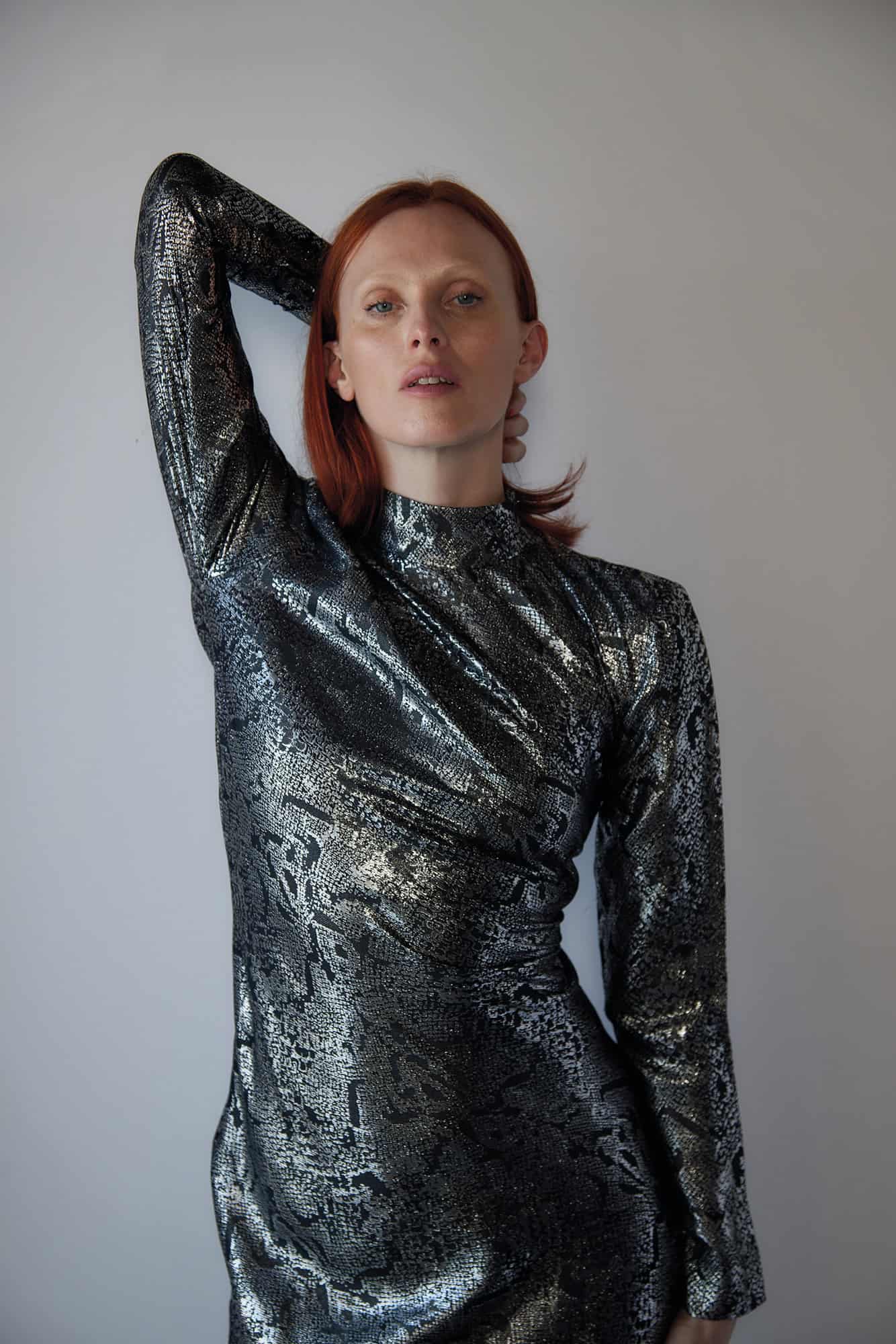 You have a coffee table book out, The Red Flame. Was it a sentimental project to work on?
It was. I’d been thinking about doing a coffee table book for a couple of years. I knew that I wanted to write my story as well and not just have it be, “Hey, look at beautiful, strange, weird pictures of me,” and a few anecdotes here and there. For me, the book was more like, let me peel back the layers of the onion because I became a model and it was implausible. I was the ugly duckling at school, I was the weirdo, pale Goth girl who nobody wanted to talk to.
You were without an agent for a while and now you’re signed with CAA Fashion. What changed your mind?
I actually enjoyed working by myself. I really, really loved it. When COVID started to wane, I got nervous. I felt like I didn’t have the infrastructure that I thought I needed, but I didn’t necessarily want to return to a model agency because I don’t want to be treated right now, like a lot of model agencies treat models. You feel like a product. I don’t need people telling me that I need to kiss this person’s ass, be available for this event. I’m a grown-up, I’m a grown-ass woman, I’ve been in this business a long time, I run my business. I just need, when there’s a deal on the table, professionals to help me negotiate, and CAA does that and they bring some stuff to the table, too. But it was a difficult decision, I’m not going to lie, because I enjoyed doing things myself and the choice was, I could start my own model agency or I could join CAA. Joining CAA seemed like the less stressful option.
You had a sold-out run performing at The Carlyle earlier this year. Was that a dream come true?
It was! The Carlyle! It was honestly one of those moments that I wish I could crystallize and keep it in a snow globe and have it next to my bed, so I could be like, “Remember when you did that fun thing and all your dreams came true?” I could look in there and be like, “Yes!” It was a dream come true, and I don’t say that in any reductive way; I mean that from the bottom of my heart. I loved Café Carlyle from the moment I saw Eartha Kitt there many years ago. I said to myself, “One day, I’m going to do that,” and I can’t believe it happened. I worked my ass off, and I’ve never had more fun performing in my life, period. I didn’t realize that I’m a lounge singer. All these years I’d been doing folk songs and I was like, “Wait, no, no, I am a lounge singer.” I had the time of my life.
You had an album, Green, which is so great, come out in May. We were so surprised by the sound.
When you work in country, everyone assumes everything is going to sound country, but these producers work on a bunch of things. Nashville has a variety of music. To work with [producers] Ian [Fitchuk] and Daniel [Tashian], it was just about the music, and everyone got to go home to their kids at the end of the day and not kill ourselves reinventing the wheel. It kind of changed my whole attitude on music. For a long time I took it too seriously because I felt like I had so much to prove because I was a model. This album was about me having fun. It was a bit more lighthearted, I took myself less seriously, and I think that’s just the arc of where I’m at in life right now, is to take myself less seriously and enjoy myself. That’s the joy of being in your forties. If I could say anything to any woman, it’s that your forties are your peak years.
Are you optimistic that things are going in the right direction in fashion?
They’re definitely moving in that direction. There’s definitely forward momentum, even as far as the past few years, looking at how much more diversity there is in fashion and how the language of diversity has changed. From ethnicity to bodies, I do think that there’s a shift. The one thing I would like to see change more is that people don’t get pigeonholed as one thing. I’m a high-fashion model, so I’m always pigeonholed as that. When someone wants to book me, I still get, “What’s her size this season? How does she look?” I’m 43 years old; I can’t subject my body to look like I’m 21. It’s debilitating ultimately. So I wish there would be a little more compassion for women as we get older. We’re not expected to look like we did when we were in our twenties or early thirties.

Sam Edelman On Resilience, Innovating, And His Biggest Hopes & Dreams For The Brand