Exclusive! DvF and Mayor Bloomberg Are A Dynamic Duo 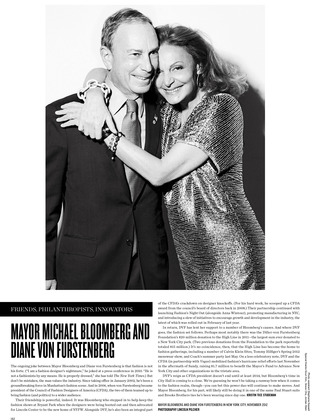 We’ve already gotten a looky at the V magazine cover of Rihanna and Kate Moss, but another dynamic duo grace the pages inside. V celebrates the friendship and business relationship of Diane von Furstenberg and Mayor Michael Bloomberg in their new issue hitting the stands on February 28th. (We can pretty much guarantee this is the sexiest magazine that Bloomberg has ever been featured in.) How did these two powerhouses join forces? DvF donated $20 million to build the High Line, Bloomberg helped move NYFW to Lincoln Center after getting kicked out of Bryant Park, and the CFDA and Vogue made a $1.7 million donation for Hurricane Sandy Relief efforts to the Mayor’s Fund to Advance New York City and other organizations in the city. We’d call this a successful union if there ever was one!