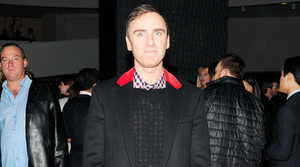 (NEW YORK) Attention, City-philes: Elle‘s formidable PR director, Erin Kaplan, is exiting the magazine, effective tomorrow. On Tuesday, January 18, she begins her new position as senior director of PR at Teen Vogue. Hm! As the savvy, blunt and platnium blonde counterpoint to Olivia Palermo’s perpetual eye-rolling and girlish flouncing around camp Elle, Kaplan made a reality TV splash on The City in 2009; the show was cancelled last fall. Perhaps it’s serendipitous that after five and a half years at Elle, Kaplan is headed to the the very publication that paved the way for MTV reality shows about the girls behind the glossies. Who can forget Lauren Conrad’s rather extraordinary (read: unrealistic and/or lucky) adventures interning at Teen Vogue on The Hills? We’ve got our fingers crossed for part deux of The City, relocated to 4 Times Square, featuring more face time with Kaplan, and with a fresh new passive-aggressive arch nemesis to replace Palermo! And even if that particular project doesn’t manifest, rest assured that there is definitely a television project in the works at TV. Stay tuned for details!
ALEXANDRA ILYASHOV