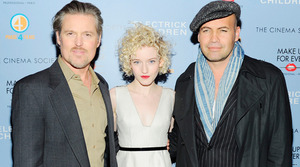 (NEW YORK) Fundamentalist Mormons, punk music, skaters and an immaculate conception? Par for the course at The Cinema Society & Make Up Forever screening of Electrick Children at the IFC theater. The indie flick, directed and written by Rebecca Thomas stars newcomer (and may we say adorable) Julia Garner, plus Rory Culkin, Liam Aiken, Billy Zane, Cynthia Watros, and Bill Sage. Infused with plenty of humor and an equal amount of pathos, the film centers around Rachel, a 15-year-old fundamentalist Mormon (played by Garner) who becomes inexplicably pregnant, shortly after she finds a cassette tape of The Nerves’ Don’t Leave Me Hangin’ On The Telephone, belonging to her brother. Believing that she’s had an immaculate conception by listening to the music, Rachel’s parents promptly arrange a marriage, and her brother is banished under suspicion. Believing she’s meant to be married to the man who impregnated her on the cassette tape, Rachel sets off to Vegas to track him down, with her brother following behind in an attempt to extract her sinful confession. There she meets the rebellious Clyde (in a great performance by Culkin) and his gang of punk skaters and musicians. A sweet and painful coming-of-age story then unfolds amid the collision two very different worlds.

Thomas, who wrote and directed the film, grew up Mormon, albeit not in a Fundamentalist family. “We grew up in a modern household. We had nintendo and all that stuff,” said Thomas. The youngest of five, her brothers and sisters were into punk music and hardcore (her sister and brother-in-law were involved in the film’s soundtrack), but she was a self-described “obedient child”. As for Zane? “I was a romantic, a sentimentalist. I wouldn’t say dramatic, but I was a bit of a trickster,” said Zane. “I was given a long leash, but I was a good kid.” Sage, on the other hand, was more of a Clyde type. “I got in trouble and I was a hellraiser!” And the Calvin Klein Collection clad Garner who was just as mignon and magnificent on-screen as she was off-screen wasn’t always so confident. “I was very shy when I was younger! That’s why I took acting classes. I needed help being more expressive,” said the very expressive Garner. “I found out I loved it!” If her role in this film is any indication, it worked like a charm.

Afterwards, everyone headed to the Hotel Americano where guests sipped on Belvedere cocktails aptly named Rock Star, Sin City and The Mixed Tape. And, we hope, got in touch with their inner children.
PAIGE REDDINGER

The Gap Goes With The Newbies for...