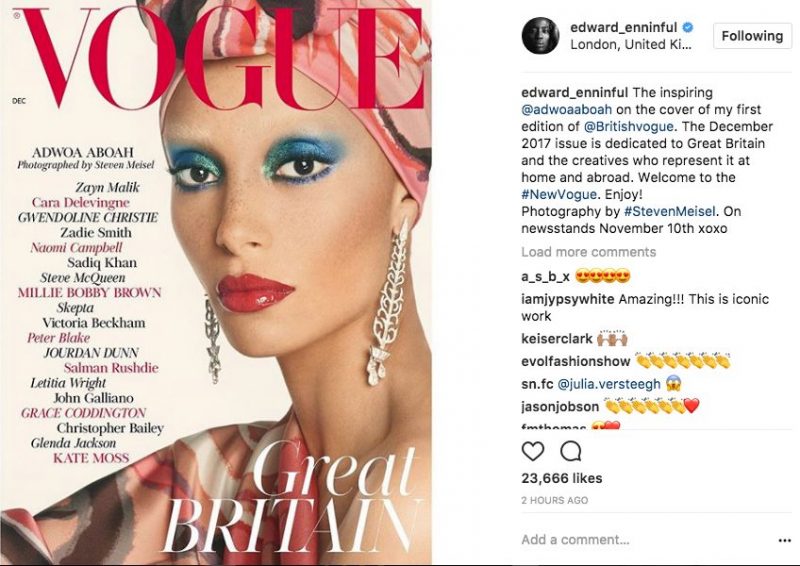 Edward Enninful has debuted his first cover at the helm of British Vogue on his Instagram today. The new issue features Adwoa Aboah lensed by Steven Meisel in a Marc Jacobs Spring/Summer 2018 dress and turban with divine retro ’80s makeup by industry legend Pat McGrath. The new cover harkens back to Vogue’s fashion-focused days when models graced the covers in ultra glam close-ups. Enninful also called on other fashion vets like Naomi Campbell, Kate Moss, Grace Coddington, John Galliano, Cara Delevingne, Jourdan Dunn, Victoria Beckham, and Christopher Bailey to be a part of his first issue. The latter just announced he will step down from his role as CEO and creative director at Burberry in March 2018. The issue also features other famous Brits like writers Zadie Smith and Salman Rushdie, actresses Glenda Jackson, Gwendoline Christie, Letitia Wright, and Millie Bobby Brown, director and producer Steve McQueen, Pop-artists Peter Blake and Zayn Malik, and politician Sadiq Khan. All are given the honor of being featured in the cover lines in the issue dubbed as “Great Britain.” The much anticipated issue will hit newsstands on November 10.