Editors Talk Models Vs. Celebs With DvF At The American Magazine Media Conference 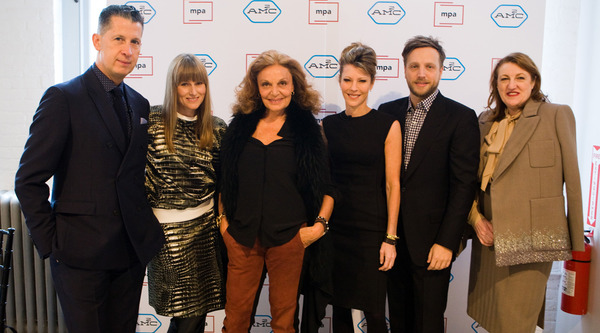 (NEW YORK) Kicking off her hosting duties at the American Magazine Media Conference, Diane von Furstenberg admitted that she’d been out very late last night along with her panel of all-star EICs, although none of them even hinted at a touch of fatigue. The early morning conference was a refresher course on how successful fashion glossies achieved newsstand success and how they aim to maintain that position. Every corner of the fashion media spectrum was covered as DvF picked the brains of Teen Vogue’s Amy Astley, Harper’s Bazaar‘s Glenda Bailey, InStyle’s Ariel Foxman, ELLE‘s Robbie Myers, and W Magazine’s Stefano Tonchi.

Delving into the juiciest bit of intel, DvF asked each editor what makes the cut when it comes to piecing together a cover. While Foxman emphasized that his readers can’t relate to models, they are in touch with the celebrity culture and want to learn more about their lives. “Everyone that has a project wants to promote it,” Foxman explained about celebs. “Nobody wants to be on the cover unless they have a project they want to promote.” Tonchi, on the other hand, can boast an audience that has a preference for being first. “It’s something I inherited from Mr. Fairchild,” he told the audience, “and we were the first to put Jennifer Lawrence on a cover, which was really our privilege.”

Bailey touted Harper’s Bazaar’s popularity, reminding the audience about her content: “We’re not just about hemlines, we’re about headlines.” She further explained, “people are so anxious to get our issue they need to buy it on eBay.” Apparently, the November issue is currently up for grabs on eBay for a whopping $50, which is quite a markup from the newsstand price of $5.99. As for how she selects her cover girls? “I look at all the faces of the models and decide which one is the happiest to be tortured,” said Bailey.

With no preference for or against models, Myers reminded the audience that while model Kate Upton may have covered ELLE‘s September issue, she is now a celebrity because of how well her issue sold. She then educated the audience that the founding editor of ELLE France started the weekly mag to open women’s appetites to fashion.

The most surprising feature for DvF (and the audience) was learning that Amy Astley’s average Teen Vogue is 21 years old, to which DvF quipped: “I thought you’d say 10 years old!” With a circulation of one million glossies sold annually and a social media platform that is five million strong, the reader of this young adult mag also has a preference for celebs. “Our readers find the models a little random and uninteresting,” Astley elaborated.

And in case you were wondering, DvF’s brand is an advertiser in all the above glossies except for Teen Vogue, which she vowed to grace with ad pages soon. But how does the designer extraordinaire decide who to advertise with? “I think of the person behind the magazine; the editor!” Ending the panel on a cheerful note, Astley reminded the audience: “There is nothing gloomy here, no one should be ringing their hands!” Least of all Astley who now has DvF’s ad approval.
BY DENA SILVER