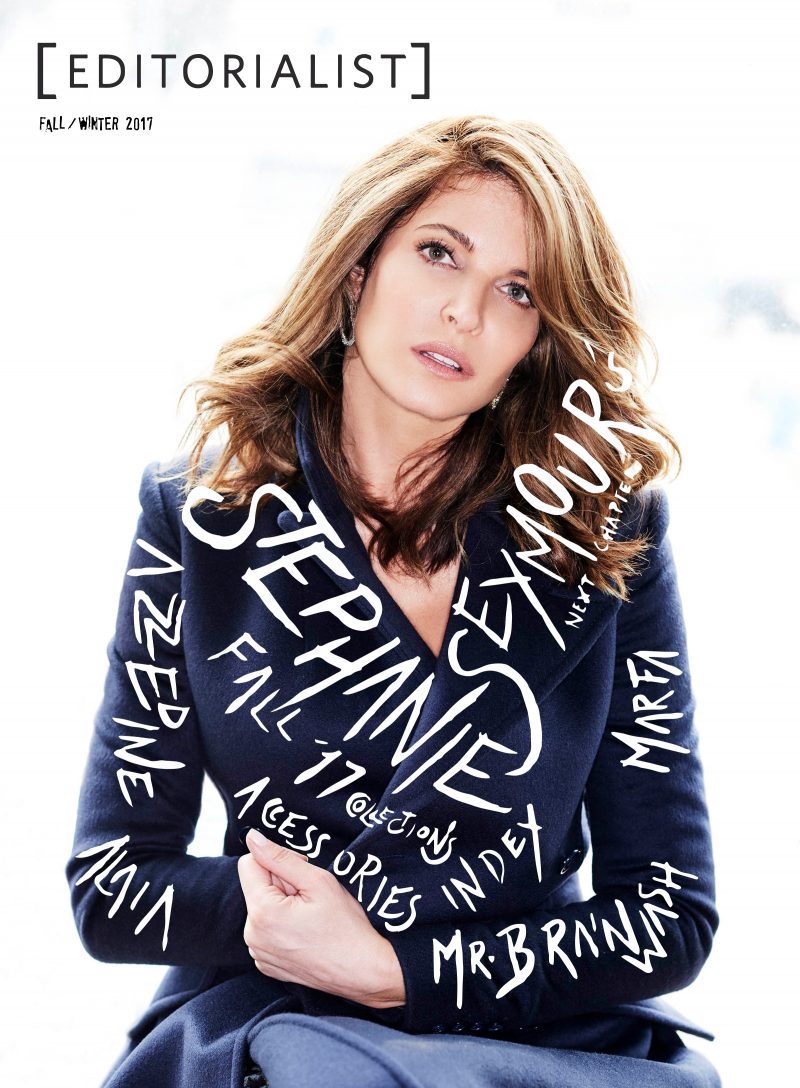 The Editorialist unveiled its Fashion + Art issue for Fall 2017 with cover star Stephanie Seymour shot by famed photographer Gilles Bensimon and styled by The Editorialist co-founder Kate Davidson Hudson. Inside the issue, Seymour dishes on everything from her new lingerie line to her close relationship with designer Azzedine Alaïa and the problem with social media in a story by Nicole Berrie. Alaïa also scored a feature by Fajer Fahad, also shot by Bensimon and styled by Davidson Hudson. The legendary designer discussed how he has continued to remain relevant with his timeless designs in an ever turbulent retail environment based on rapid fire trends. Plus! Actress Brooklyn Decker discusses her new digital wardrobe platform, Finery, founded with former CNN newscaster Whitney Casey, in a feature by Lauren Joseph, styled by Michaela Dosmantes, and shot by Kurt Iswarienko in Malibu.

Also inside the issue is an accessories shoot by stylist and The Editorialist‘s contributing creative director, Kate Lanphear, who this time got behind the camera. Lanphear shot the story in Marfa, Texas this summer, capturing accessories like Loewe’s Barcelona bag and an Hermès bandana perched amid Marfa’s sleepy Western scenery. Below, Lanphear filled us in about shooting in Marfa and whether or not photography could become her new platform.

Why Marfa?
Namely, because I worship Donald Judd. And I’ve also been so curious to walk the Robert Irwin since it opened, so my best friend and I decided to do a makeshift Thelma & Louise pilgrimage. We got to go into the Irwin just before twilight which was…I am at a loss at how to even articulate it. It was an almost holy experience.

Why does Marfa have such an enduring appeal for creatives?
Marfa represents what a viable alternative proposition for creatives might look like. It’s the realization of a desire to buck the system in order to stay true to a vision. The idea of artists seeking refuge from the establishment has enduring appeal but is particularly appealing to me right now. Not to mention, it offers a pure, unencumbered way to see art with such sensitivity and respect for the artist and their intent.

Do you think you would eventually like to photograph fashion shoots as well?
Never say never. Haven’t thought too much about it but always just try to stay open to any creative outlet. So far though, the “models” I’m most interested in shooting are my godchildren, which is touch-and-go…you know what they say about working with animals and children.

What is your must-have accessory from NYFW for next season?
I think Claudia Li is a real talent to keep a keen eye on. As far as accessories, I nostalgically wished my hair was longer so I could revisit the fail-safe scrunchie seen at Mansur Gavriel.