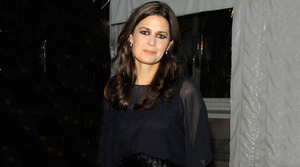 (NEW YORK) A big upper management adieu chez DvF: Paula Sutter, the president of Diane von Furstenberg Studio, LLC will leave her post as the president of the company. Sutter was named president of the brand in 1999, one year after she was appointed as a consultant for the label. What was Sutter responsible for bringing to the Diane von Furstenberg empire during her 14-year run helming the company? Free-standing stores, a presence in department stores, a vast range of accessories running the gamut from sunglasses to shoes and even bedding, plus a presence in over 70 countries.

Starting her career at Madison Avenue Design Group, Sutter made the switch from a showroom environment to a sales environment by joining the team at Donna Karan. Prior to joining the DvF, Sutter was the VP of sales for all domestic divisions of DKNY. A successor has yet to be been named for Sutter, whose last day at DvF will be December 31. In the interim, Joel Horowitz, a Tommy Hilfiger alum and current DvF co-chairman, will fill the presidential slot for now.