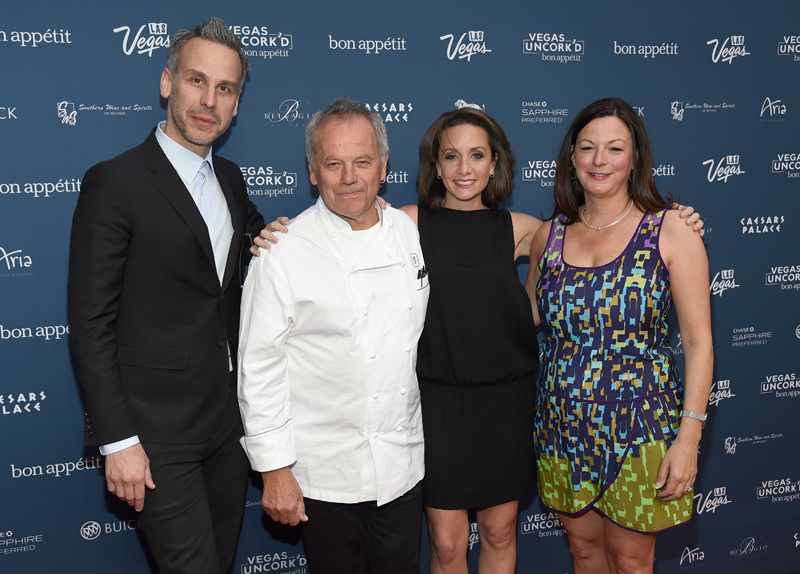 What’s does a foodie’s dream night consist of? Our bet is on The Grand Tasting at Vegas Uncork’d by Bon Appétit. Considered the ultimate culinary event, The Grand Tasting was held last Friday at the Garden of the Gods Pool Oasis at Caesars Palace and welcomed more than 76 award-winning chefs. Jean-Georges Vongericheten? Check. Guy Savoy? Hi, there! Emeril Lagasse, Michael Mina, Susan Feniger, Gordon Ramsay? Present.

One of the city’s original star chef transplants, Wolfgang Puck, was also in attendance. (He brought Spago to town long before it was the thing to do.) A few hours before Uncork’d started, we chatted with the celeb chef to find out how he put Sin City on the culinary map. “We always try to bring a civilized life to Las Vegas,” the friendly Austrian native told us. “Not that it wasn’t civilized, but people outside of town only think of gaming and nightlife. We wanted people to know we have great food and hospitality that people didn’t talk about. When we started Spago 23 years ago, there weren’t any restaurants that had any recognition outside of the city. All of the sudden we became this iconic restaurant. It’s the same with Uncork’d! So many chefs followed us here.”

We were intrigued to learn about Puck’s ties to the fashion world. “I know Tom Ford really well personally. I have to go to his store because he comes to our restaurants.” Another fashion connection? “My favorite cookbook was written by Christian Dior! It’s called La Cuisine Cousu-Main. Cousu means sewing.”

The man who has fed some of the most legendary names in Hollywood, from Orson Welles to Ozzy Osbourne, also told us he’s not sentimental about his days in the kitchen. “The cooking doesn’t really interest me or the food, but what does interest me is the rapport I had with certain people. Sidney Poitier is probably my current favorite of the old guard.” That very rapport he has with people was in full swing as we watched him take photos with customers and fans. “The people in Las Vegas are very nice and giving,” Puck said. “I feel comfortable here. They were welcoming at the beginning and I didn’t expect that. It’s now one of the great cities for food in the country, if not the world.”

The New York Schedule Is Here! What...