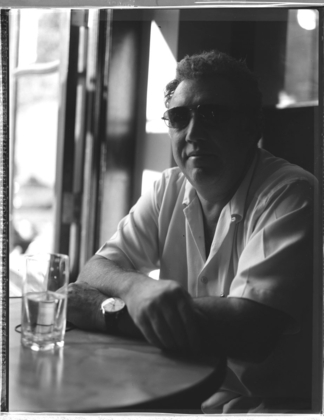 Foodie break! Downtown restaurant legend Georges Forgeois came to New York in 1979 with $500 and a backpack. These days he’s the owner of Café Noir, Bar Tabac, Le Singe Vert, Cercle Rouge, and Jules Bistro, his first place celebrating 20 years of feeding Manhattan and live jazz every night. His latest venture, Clarkson on Varick Street, recently opened their doors and the fashion set is flocking to it. The Daily chatted with Forgeois to pay homage to the man of the hour and get the details on his new joint. Thanks for feeding us all these years, monsieur!

How did you end up where you are today?
I came to New York and started washing dishes because my English was very poor. From there I moved to a bus boy and then a waiter. The job was easy and you made some decent money and I learned the business.

Do you ever wash dishes these days?
No. It’s been about fifteen years…

Congrats on Jules turning 20! Where did you start?
Basically 22 years ago I’d been looking for money from investors, like everybody with a business plan blah, blah, blah. I was going nowhere and it was very difficult. I decided to save my money and not go out for two years; not to go to a bar or restaurant or anything. I just worked and saved the little money that I got and was able to open Bistro Jules with $40,000.

Do you think we live in a New York City where that could happen now?
If you want to then yes.

Why?
Because often times I’ll see some small places, like in Williamsburg on a corner with maybe 15 seats and a kitchen, that used to be a take-out place for Chinese, and I think I could take over this place and have 15 people sitting around with a little bar and do it for very cheap. I was like ‘wow, if I was young again, with a little money I would take this place.’

Why did you name your first restaurant Bistro Jules?
Jules is a very old first name that people don’t use anymore. It used to be the name of the grandfather of a friend of mine. I love that name; it’s very rustic like the food and the wine.

You then opened Café Noir…
I didn’t want to do another French place because I had just done that. I went to Spain one time with my father and I remembered this little place where you eat and you share and I knew there were a few restaurants at the time like this in New York, but nothing fun. It’s always a little strict old Spanish restaurant and nobody knew about tapas. So I decided to do Café Noir. The decoration is from when I grew up in North Africa. The back of the restaurant and the arches and all that is like Algeria and the front is more like a bistro. It’s more like the colonial style, which I also do at Clarkson in a much better way. I wanted the place to be fun and late night and I wanted people to share small plates. I think I’m the one who put tapas on the map in terms of making it fun. I didn’t invent tapas, but I made people discover a new way to eat.

Le Singe Vert was next. What made you move from Soho to Chelsea?
The funny thing is that I never look for a place. The place comes to me. Café Noir came to me because somebody suggested that I look at this place. I’m not a Chelsea person but this guy called me and said, ‘hey Georges, there’s this place that’s interesting.’ I made the bid on the place and it took three years of negotiation from my first offer. So you have to be patient. I always have a rent in mind. If I get it then I take it, but if I don’t then I leave it alone.

Let’s talk about your delicious new place, Clarkson!
At Clarkson I was very interested in the young American chefs. They have their own ideas. Ten years ago you had the big American chefs who were very good but the small guys were a little lost. But I think what they do now is fantastic because they do it their way. They look at farms in the area and do organic meals; I like the philosophy behind it. It’s very hard for French chefs to do that. They do what they’ve been taught for 30 years. Same with the Italians; they do their thing and that’s it. I think the Americans are more adventurous. They try things and sometimes they fall on their face, and then they get up and try again. But when they get something good, it’s really good.

What’s your favorite thing on the menu at Clarkson?
The Poussin for the main course and mushroom salad with arugula. But there are many good things there!

Brooklyn Gets Its Own A.P.C. Outpost

Take A Walk On The Wild Side