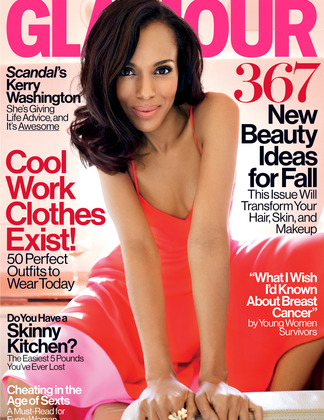 We can’t get enough of Kerry Washington these days, et vous? Recently named to Vanity Fair’s International Best-Dressed List, Washington is gracing the cover of Glamour’s October issue to talk (with the mag’s EIC, Cindi Leive) about her “gladiator” role in Scandal as Olivia Pope, how she managed to get married in June without anyone knowing, and what’s on tap next for the much in-demand star. In researching her new role, she admits to calling Diana Ross’s daughter for fashion advice. “I actually called Tracee Ellis Ross, who’s a good friend, and literally asked, ‘How do you pronounce Hermès?’ Red-Carpet Kerry needed to know.” It seems everyone wants to be like Olivia Pope – or at least, they want to own her accessories. Her keen sense of style in Scandal has fans clamoring to get pieces from her character’s wardrobe, including the actress’ own mother.  “My mother was like, ‘I think I want an Olivia Pope watch for Mother’s Day,'” said Washington. Plus, according to Glamour, fans have been rushing to Prada for Olivia Pope’s white Bauletto Vit. Daino Talco Tu purse. Ah, the power of TV. Pick up the issue on newsstands September 10th.