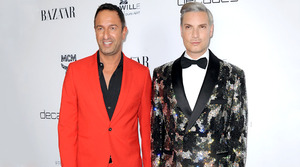 (NEW YORK) Cameron Silver and Christos Garkinos of the much lauded LA-based designer vintage store Decades, are getting their time to shine tonight with a new reality show called Dukes of Melrose premiering on Bravo at 10:30 PM ET/PT. The show follows the dynamic duo as they scour the chicest closets of the city of angels’ most luxe names like burlesque beauty Dita Von Teese, stylist Tracy James, and the late comedienne Phyllis Diller, who apparently discusses her shaved beaver (fur, darlings, fur!) in an upcoming episode.

What else do they have up their stylish sleeves? The Daily got a sneak peak at the first episode and there’s plenty to love between these two larger than life personalities. Expect a fair amount of bickering and teasing between the spendthrift Silver and the business-minded, frugal Garkinos as they outfit their fashion-savvy clientele, which is as far reaching as Dubai. Plus, socialites like Patricia Kennedy can be seen selling fabulous Givenchy haute couture gowns to the tune of $10K (proceeds for her charity, bien sur). Besides, a woman that can afford what was originally $55K, in 1987 no less, doesn’t need the cash, right? As Garkinos says, “I’m the Robin Hood of fashion. I buy from the real rich and sell to the less rich!”

At a press preview held at the Bravo offices yesterday, the two were hilariously candid as conversation about the show devolved from topics like which designer sells the most at auction (McQueen for Givenchy) to waxing of the nether regions to the network’s own Patti Stenger about whom Silver quipped, “Patty Stenger was my favorite stylist that dressed like shit!” If gems like that are any indication, Bravo has hit a home run.
PAIGE REDDINGER