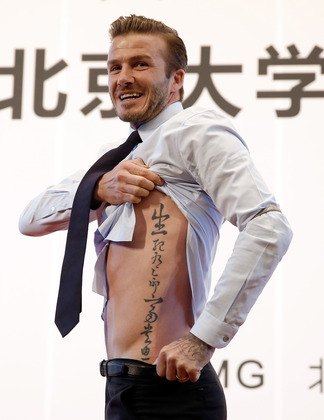 David Beckham has gotten another tattoo and wants you to see it! At an appearance in Beijing yesterday, Victoria’s man showed off hanzi Chinese characters on his torso to admiring fans. Anybody have a problem with this? Becks has been in China promoting youth football as part of his new role as a Chinese football ambassador. Gotta pay for those tats somehow.

Karl Lagerfeld Gets Into The Burlesque Business

Victoria Beckham Kissing Her Family After Her...