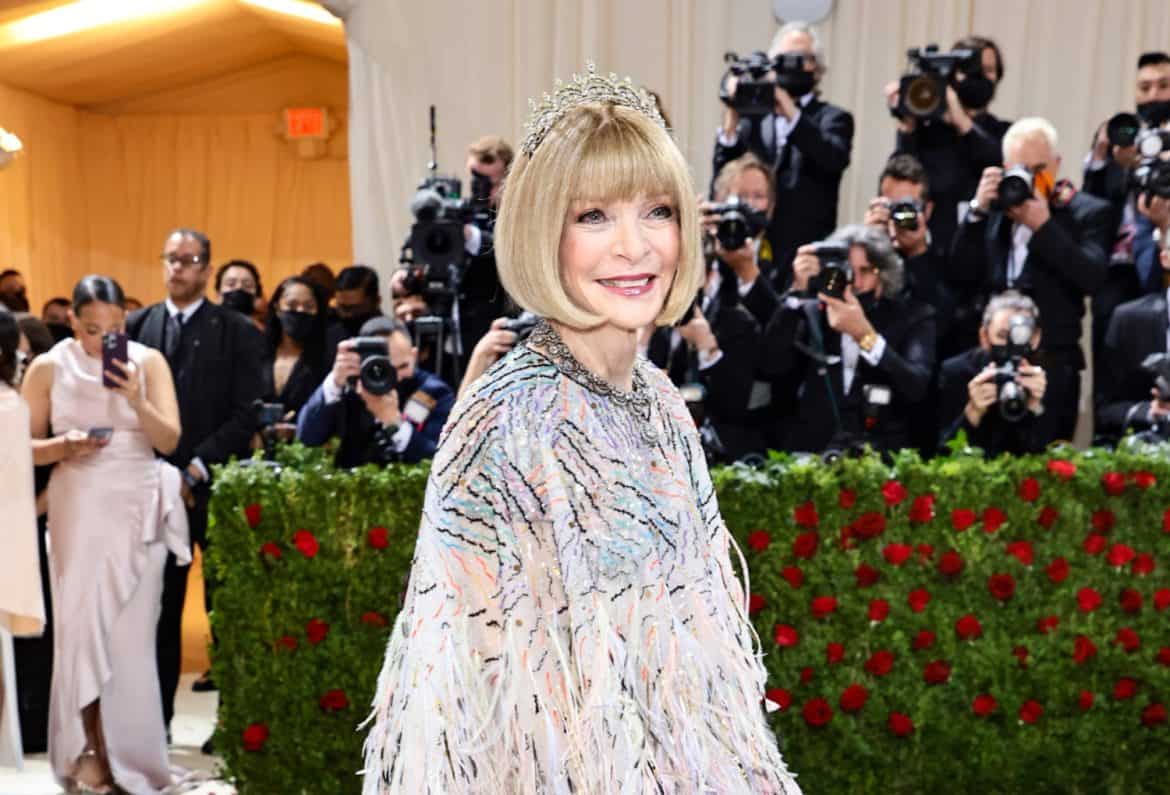 Author Lauren Weisberger’s experience as an assistant at Vogue might have changed her whole life and career trajectory, but evidently her stint didn’t make much of an impact on Anna Wintour at the time. According to a chapter in Amy Odell’s upcoming Anna: The Biography, which charts the life and career of the 72-year-old editor, Wintour reportedly admitted to her then-managing editor Laurie Jones that she didn’t know which of her previous assistants had written the novel. It was only when the rights were snapped up for $250,000 in 2006 and Anne Hathaway, Stanley Tucci, and Meryl Streep were tapped to appear in the movie version did she begin to pay attention. The book states, “When Anna learned about the book, she said to Jones, ‘I cannot remember who that girl is.'” The biography, which was not fact checked or approved by Condé Nast, also adds that Wintour attended a private screening ahead of the premiere—reportedly kitted out in head-to-toe Prada. Director David Frankel also told Odell that he overheard the longtime editor’s daughter, Bee Shaffer, telling her mom that the movie “really got” her character correct. 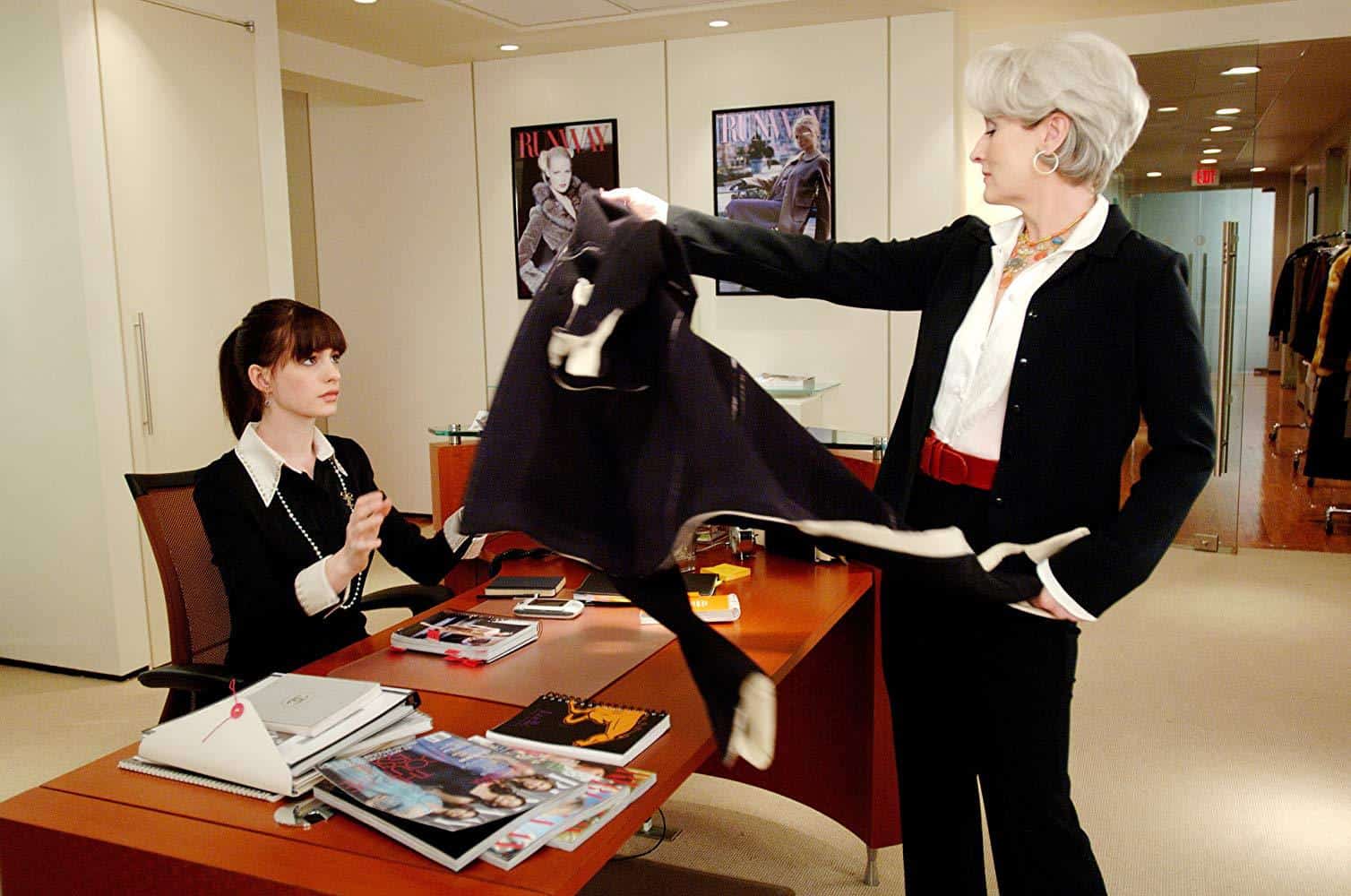 While Rihanna and her fashion presence were sorely missed at this year’s Met Gala—she’s on track to deliver her “lil fashion killa” any moment—she was still there in spirit. And by spirit, we mean marble. Debuted via a Vogue Instagram post, the mama-to-be is the latest addition—albeit virtual—to enter the Met Museum’s Greco-Roman galleries. Inspired by the singer’s lace jumpsuit moment on her most recent May cover, a digital rendering shows a marbled statue of Rih perched in the center of Greek deities and Roman rulers; arguably, right where she belongs. “The statue of Eirene (The Personification of Peace) is usually the highest-profile marble goddess [in the Met Museum] Greco-Roman galleries,” the caption read. “But now we’ve got [Rihanna], straight off this month’s Vogue cover.” In a similar way, the publication produced digital renditions of Met Gala attendees, forged into museum pieces (i.e. a Kravis-adorned porcelain vase and an Anna Wintour portrait enshrined in the Great Hall).

You and your stylish minis can match all summer long. Be it an ode to Mother’s Day or a must-have for summertime holidays, Cult Gaia’s debut childrenswear category. To announce the expedition, the Los Angeles-based ready to wear and accessories label showed it off with cute images of kids hard at play, on the tennis court and at the beach. As for the vision board, think: Cult Gaia favorite silhouettes and motifs you know and love, shrunken down and ready to be hopped-about in. Case in point: a miniature rendition of the popular Orli Top and Aloe Multi print. Breezy cotton overalls, paisley dresses, ruched bikinis, and two-piece play sets, among other wares, are up for grabs. Starting at $58, the inaugural capsule “Mini” is officially up for grabs online.

Saks’ latest campaign portfolio is all about raising awareness about, and furthering discussions around, mental health. To do so, the luxury retailer tapped Dr. Mariel Buqué, holistic psychologist and international trauma expert, for a video installment where she offers up her three tips for mental wellbeing. Dr. Buqué is set to be a primary fixture for the campaign, with other such content said to debut throughout the month. Saks has also released $5 affirmation decals—which read “Start Anywhere,” “Kindness Matters,” and “Trust Yourself”—with 100% of sale proceeds going toward its own Saks Fifth Avenue Foundation. The foundation will work through its nonprofit partnerships to increase education, improve access to proper care, and advocate for those who need it most. The foundation has also launched an open grant application, through which nonprofits can request funding for mental health research, support, education, and more. In true Saks fashion, the retailer’s NYC flagship will also feature a special neon-hued window installation decorated with positive affirmations. Other events, including panel discussions and experiences for Saks associates are already penciled on the month’s calendar.

The Formula 1 enterprise has enlisted Miami as the coordinates for its next Grand Prix race, and The Webster and Rhude have something in store. The luxury multi-brand retailer has teamed up with the buzzy Los Angeles streetwear label for the release of a motorsport-themed capsule. Stamped “Always First,” the line was born out of Rhude founder and creative director Rhugi Villaseñor’s childhood love of racing cartoons and motor car toys, plus the luxury retailer’s Miami heritage, as well as the impending race scheduled to run its course on Sunday. True to form for Rhude, the ensuing 11-piece collection is a lesson in graphic design, and features traditional racing check motifs mixed with South Beach’s  laidback aesthetic. Hero pieces include a breezy button-down, a varsity jacket, a printed terry short and a bucket hat for good measure—with the checkered print in the driver’s seat throughout. “The love for cars and racing is very much ingrained in the city, and with the increasing popularity of F1 in the United States over the years it feels like the perfect addition,” The Webster founder and CEO Laure Hériard Dubreuil said of the collab. Retailing from $192 to $3,000, the drop is officially up for grabs at the retailer’s South Beach outpost, as well as online. Catch you on the course! 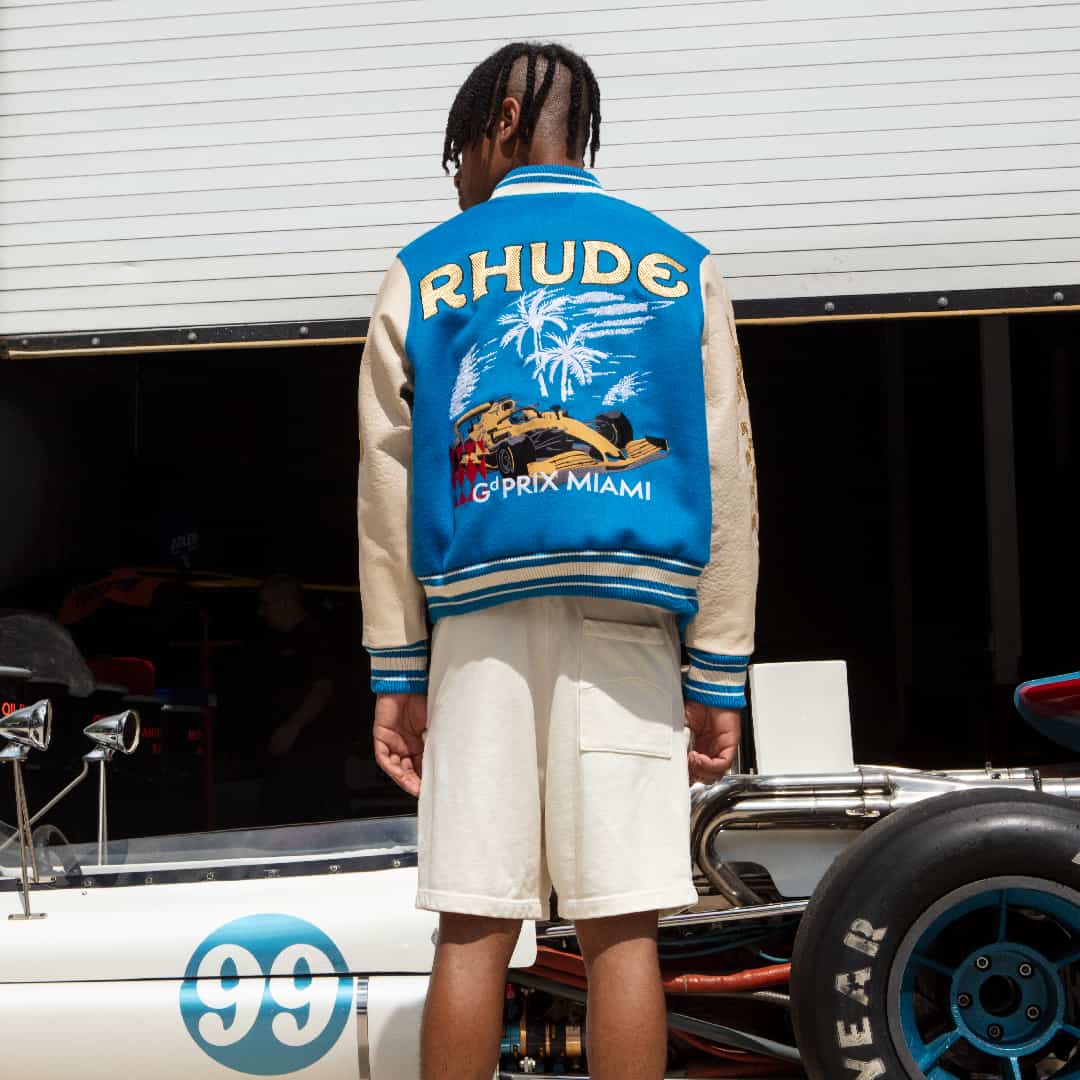 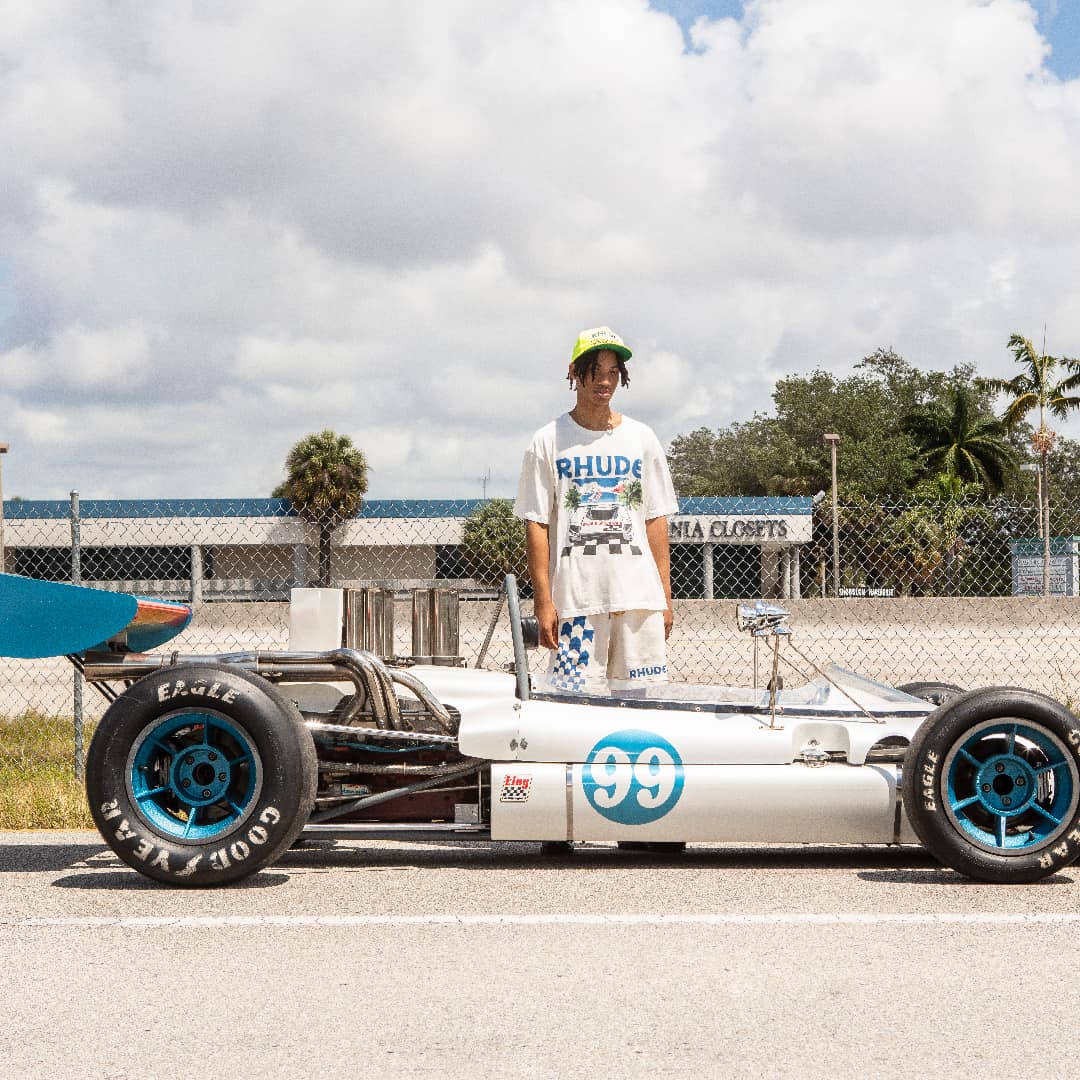 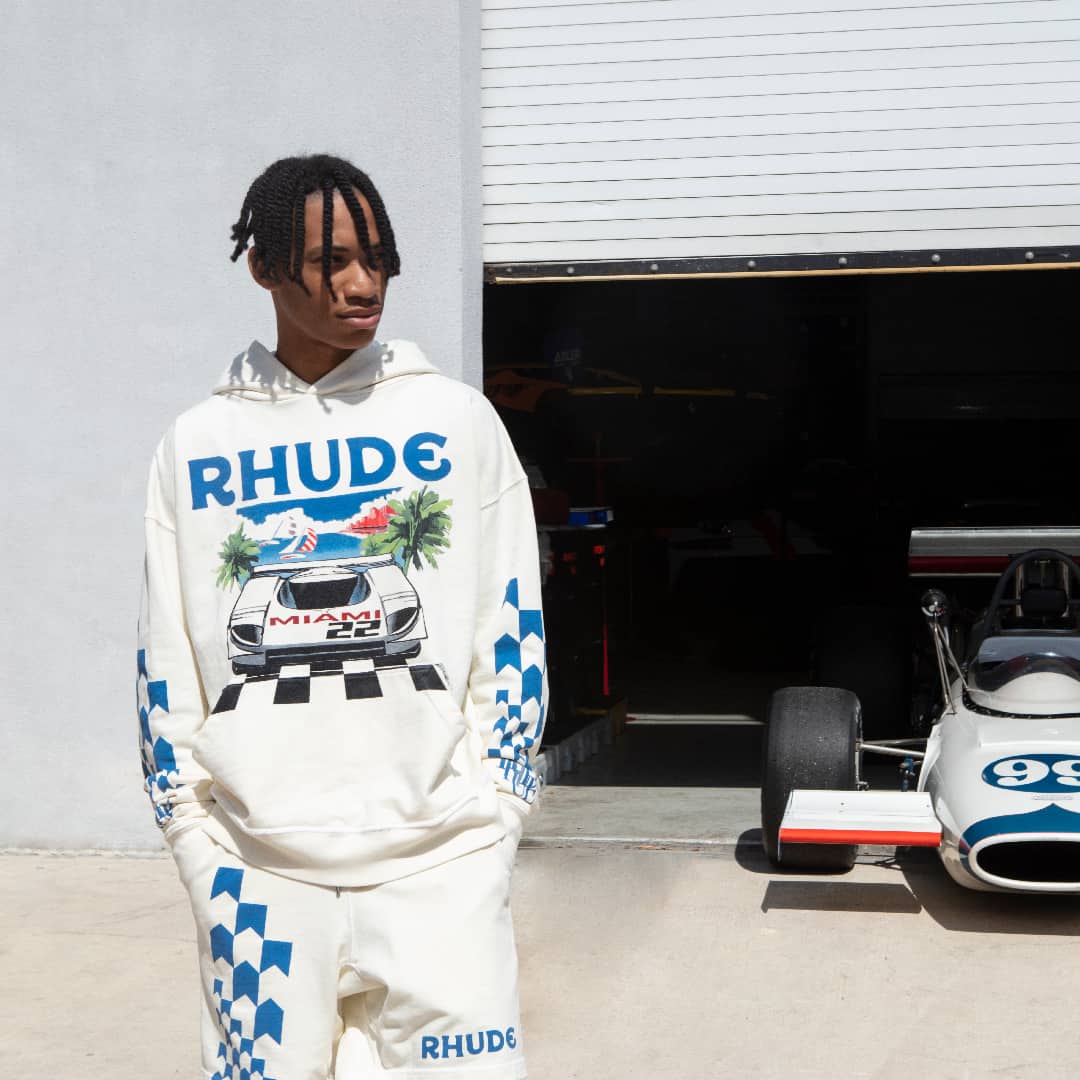 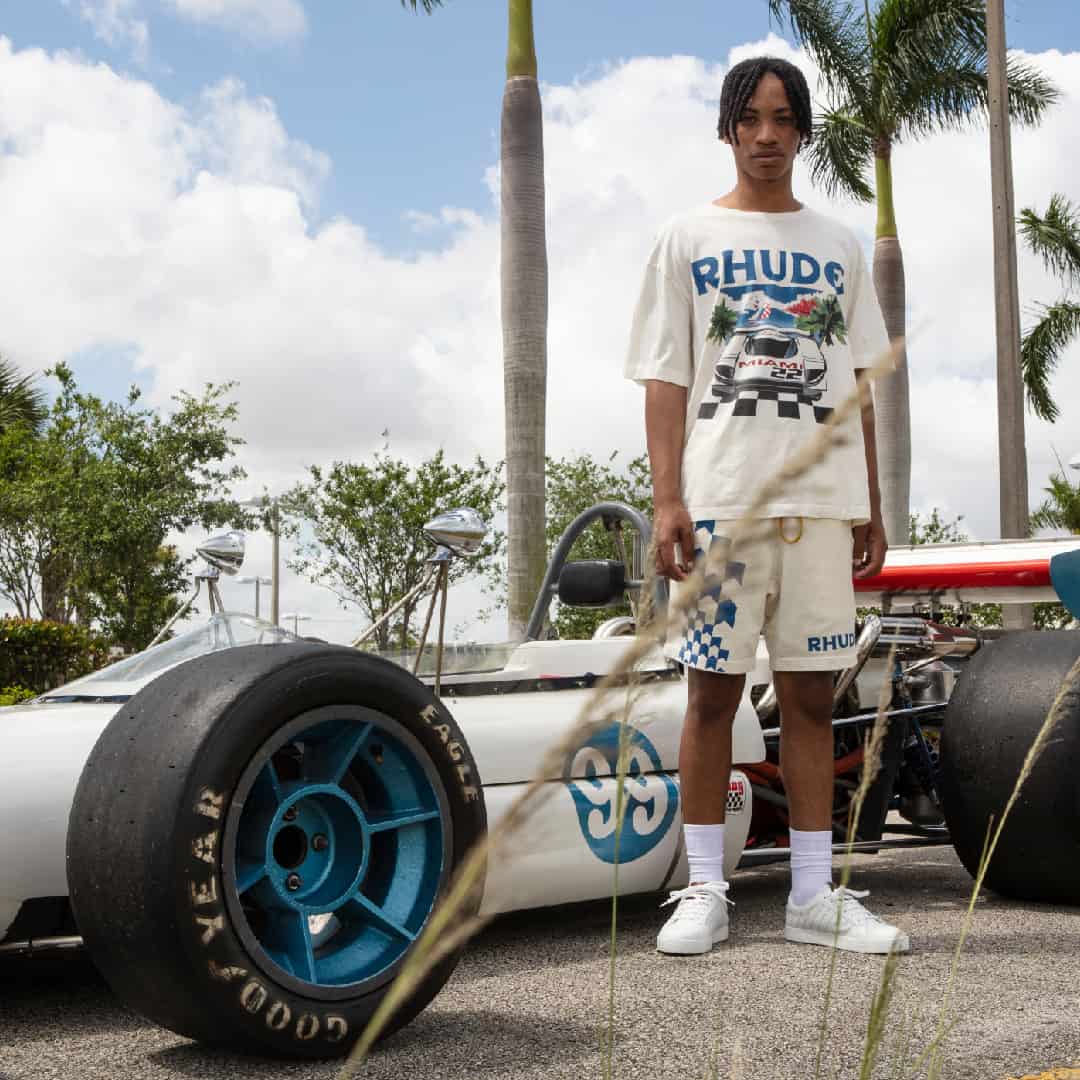 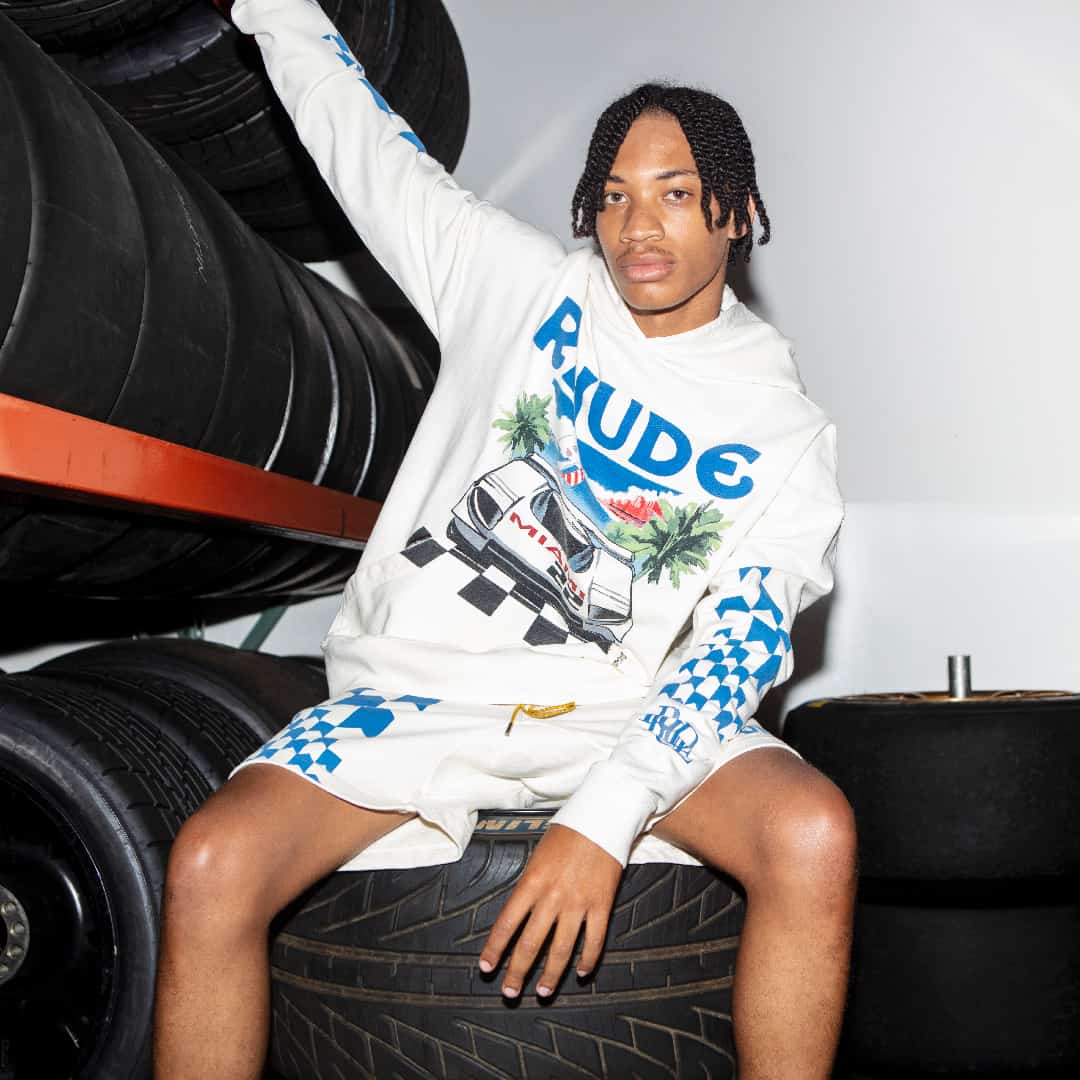 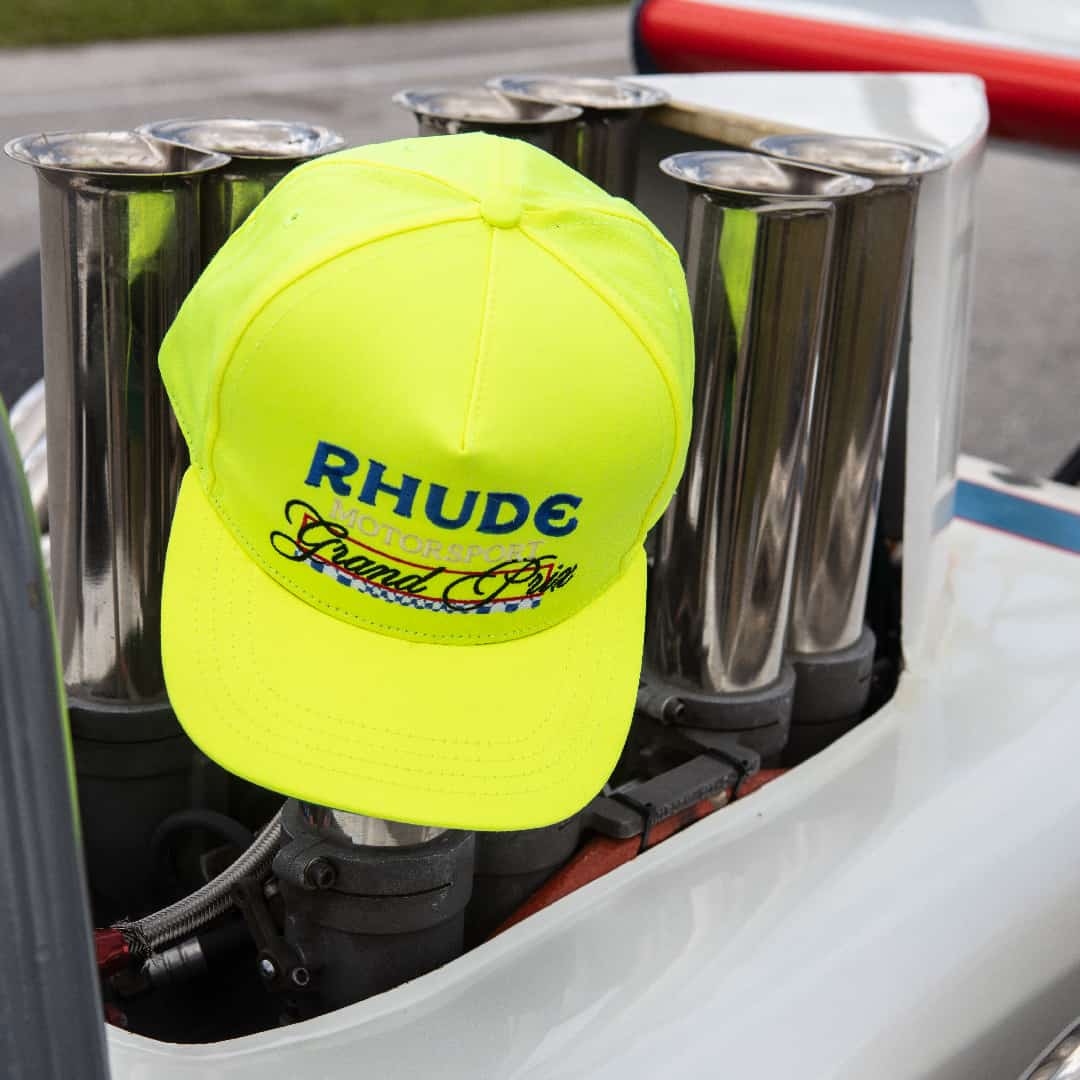 Borsalino brings Italian craftsmanship to the US with Miami pop-up

Speaking of the sunshine state! Penciled to run from April 2 to July 31 in Miami’s Bal Harbour Shops, Italian milliner Borsalino has unveiled its first US outpost. Saving bad hair days and ensuring style statements since 1857, Borsalino is the oldest luxury hat manufacturer in all of Italy—and their bread-and-butter business plan (not to mention Italian craftsmanship) may be to thank. Encapsulating 160+ years of sophisticated elegance, the boutique combines the brand’s long standing heritage with modern design appeal—dark tones, backlit lighting, and a standout honeycomb structure to display the latest styles for men and women. The stateside development marks a first for the label, who’s been making retail debuts in Mykonos, Milano-Linate, and Monte-Carlo. “This new Borsalino pop-up in Miami allows us to test our presence in the US, a market we strongly believe in with great potential,” said Borsalino managing director Mauro Baglietto. “Our retail plan continues to develop and the goal to grow in a balanced and sustainable way remains an important and integral part of the Borsalino strategic relaunch.” Watch this space! 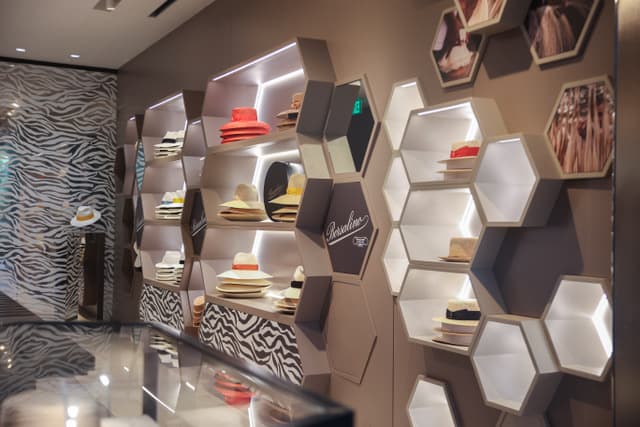 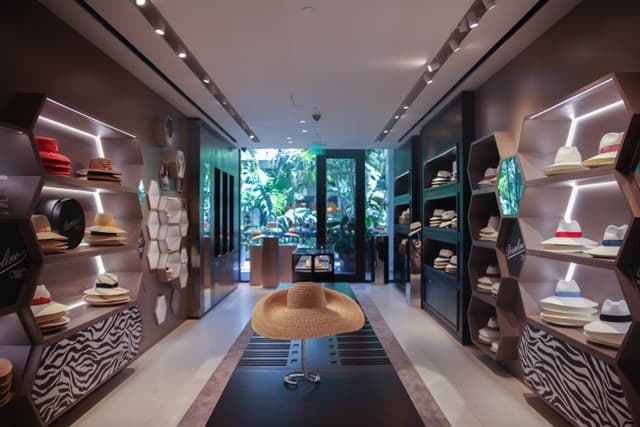 New Jersey’s American Dream is already a favorite among luxury shoppers, diners, and entertainment lovers (and waterpark fans!). And now, with the impending addition of its Paradox Museum, the destination will add another must-see element for visitors who want their minds twisted, challenged, and tricked. The 11,000 square foot development, scheduled to open its doors in late 2022, will welcome guests of all ages to engage in over 70 paradox-based exhibits and learn the science behind paradoxes that seem to defy reality altogether. “We offer an experience that will open up new perspectives and touch the hearts and minds of those who wish to truly challenge their senses,” said Paradox Museum CEO Harris Douros. “We could not be more excited to welcome Paradox Museum to American Dream.” Family fun, unleashed! 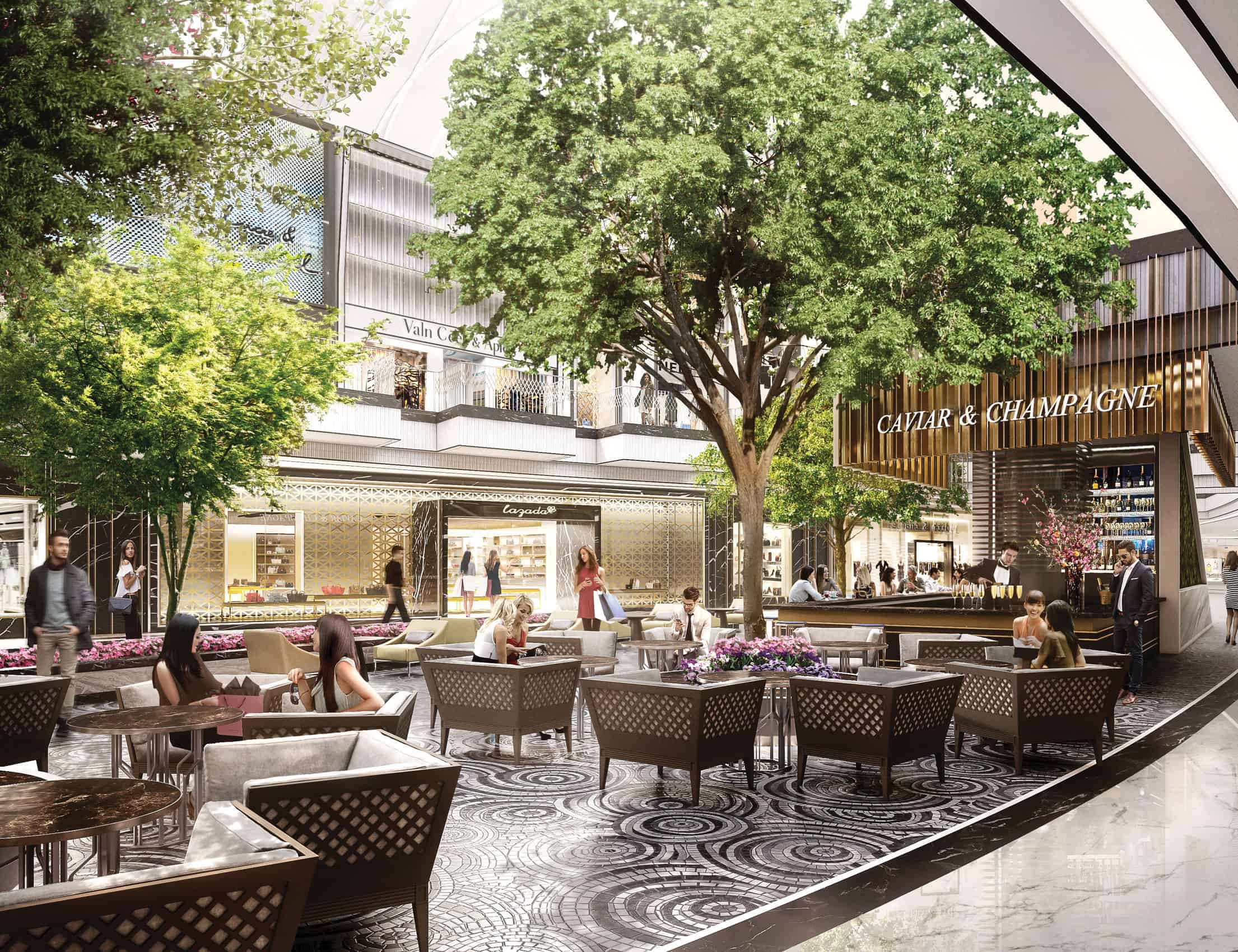 Champagne Bar in the Collections at American Dream

“I Was Never Asked To Be Part Of The Reboot”: Kim Cattrall Clears The Record On SATC Fall Out