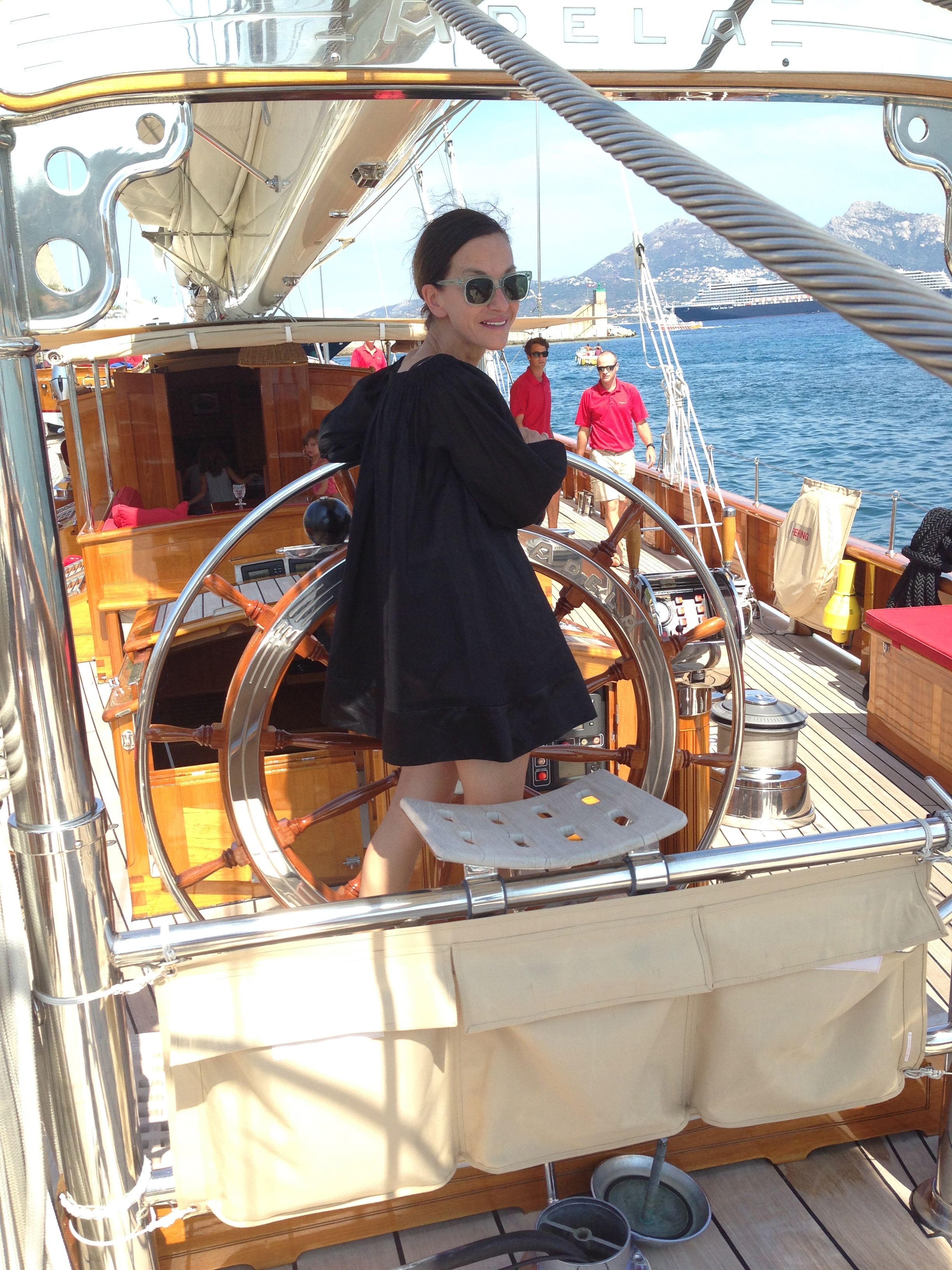 What does a designer do pre-fashion week? If you’re Cynthia Rowley, you sail the western coast of Corsica. If you’re a publicist already deep in the trenches of planning fashion week madness or an editor facing the season’s looming schedule, take some post-fashion week vacay inspiration! Rowley filled us in our chic travels in the Mediterranean.

“This August I took my family sailing down the west coast of Corsica for five days. The whole trip felt like a scene out of The Talented Mr. Ripley…minus the murder and intrigue. We flew into Calvi where a deckhand shuttled us from the airport to the harbor. Our friend’s sailboat was a 180-foot schooner moored in the shadows of Calvi’s famous citadel. A beautiful wooden tender (think classic Riva style) brought us from the docks out to the boat.

Every day we went swimming or wake boarding or exploring cliff side caves in kayaks. But before we left Calvi, all of us went on a quick hike to some ancient hilltop ruins in a town called Occi. The only building active there today is a small church, which our guide said, was rebuilt with the assistance of Laetitia Casta who grew up nearby. We set sail the next morning or rather motored south as a boat this size requires ten knots of wind to get going and conditions proved much too calm. In the laziest part of the afternoons, our host would serenade us on his ukulele and everyone drank Pimm’s while sampling the island’s soft cheeses and dried meats.

Our final destination was Ajaccio, birthplace of Napoleon so, knowing this, I’d brought along a copy of Stanley Kubrick’s un-produced Napoleon screenplay from 1969. Our second night in Corsica, the evening of the super moon, we anchored near Girolata, an adorable postage-stamp of a place accessible only by sea. Perhaps my fondest memory of our adventure is when the first mate rigged up a rope swing from the mast that we took turns jumping from like swashbuckling fools. Often the crew would get an early start so by the time we woke, the boat was at a new destination surrounded by stunning red rocks and deep pool blue water. A line from Kubrick’s script has stayed with me, even now that I’m back in New York. It was Napoleon discussing battle strategy. “The simplest moves are always the best,” he said. I guess the same reasoning might apply to vacation strategies.”

Mixing It Up With Designer and Surfing...