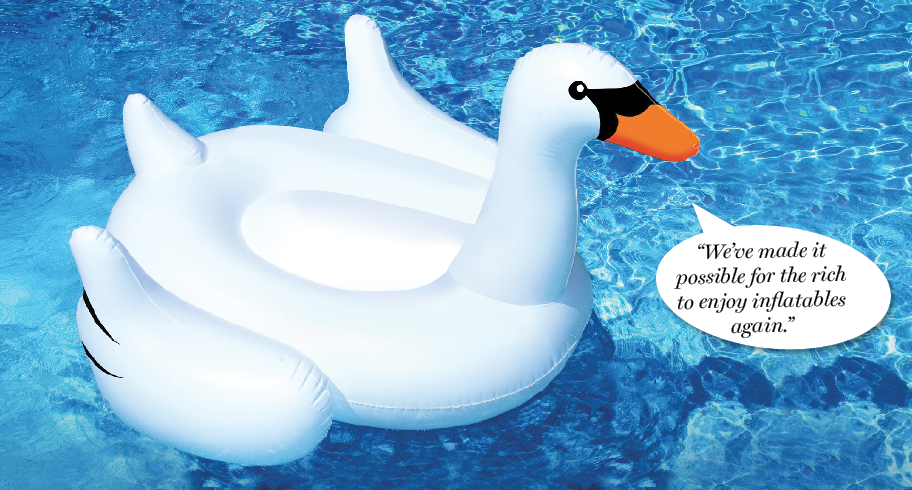 Straight from the glossy pages of The Daily Summer: He doesn’t bite, but boy can he hiss. The Hamptons’ most stubbornly ubiquitous bird opens up about haters, fatherhood, and his sweet life in the shallow end.

First off, what’s with the publicist?
An inflatable pool toy isn’t allowed representation?

It’s just a little weird. You’re the first inanimate object we’ve ever interviewed who wouldn’t speak to us alone.
I’ve been burned before is all I’m going to say. Perhaps you read that pun-filled excuse for a hit piece in The Wall Street Journal last summer? They thought they could deflate me, but since that article my sales have soared! Anyway, just ignore Ms. Otto. She’s really only here as a friend. Ask me anything you’d like.

Okay, well, it seems like you’re still literally everywhere in the Hamptons. Aren’t you a little over it at this point?
What do you mean by that?

That everywhere we go—every seated backyard barbecue, every alfresco benefit cocktail—we see you floating around with that same vacant stare. Sometimes you’re alone, sometimes you’re with your partner…
My wife?

Oh, sorry. Yes, your wife.
I know it’s difficult to tell without examining our valves. But in regards to our ubiquity, there isn’t much to tell you. We’ve been blessed with an exceptionally large herd, and people seem to like us.

You’re like the Schnabels of aquatic recreation!
I’m not quite sure what you mean by that, but Julian is a close personal friend, so I’ll take it as a compliment.

It is, sort of. We see you’re still sold out on Amazon…
Four months and counting, yes. We have an authentic aspirational appeal that transcends the Hamptons. Also, we’re only $49.99 with free shipping. You New Yorkers are so jaded. You have no idea what real people want. Our team at CAA says that we haven’t even scratched the surface yet.

We wouldn’t doubt it.
But let’s back up a bit. I’m sensing some real hostility, which I don’t think is called for. It’s not our fault if we’re quote-unquote “everywhere.” We’ve got the perfect combination of playfulness and panache, as our dear friend Joe Zee likes to say. Inviting us into one’s yard tells visitors that you know how to have fun in your pool, but a certain kind of not-middle-class fun.

Is that what it says?
As my dear friend Marjorie Gubelmann likes to say, we’ve made it possible for the rich to enjoy inflatables again, without shame.

Did they ever enjoy them before?
There was a brief vogue for alligators in the early ’80s, but we’re the first to legitimately blow up. Wanna make a billion dollars? Design an elegant water slide. You’ll have the folks on Further Lane beating down your door!

Thanks for the tip. You have your own Instagram hashtag, and the giant swan selfie is practically its own subgenre. Do you worry about a backlash?
I have several hashtags, actually, none of which were made by me. I can’t help it if nubile rich girls in skimpy bikinis like to make their friends jealous.

But how did you end up in the Hamptons, by the way? Aren’t you from China?
Technically. My parents were colonials. I first entered society in the mid-aughts after some bored Southampton hostess bought my wife and I at Costco. We mate for life, you know.

Doesn’t it get a bit tedious, though? All that lazing around?
It doesn’t, actually. Seeing that look of childish glee on a person’s face the first time they encounter us keeps us afloat.

So, what’s next for you guys?
Right now we’re focused on the present and providing as much understated whimsy as we can. Every pool toy ends up mildewed and deflated in a pile behind the cabana, but we’ve had a good run and we’ve got thick skins. And once our patent expires in a couple years, who knows where we’ll land? There are millions of lesser pools left to colonize. Until then, we’ll wing it out here.