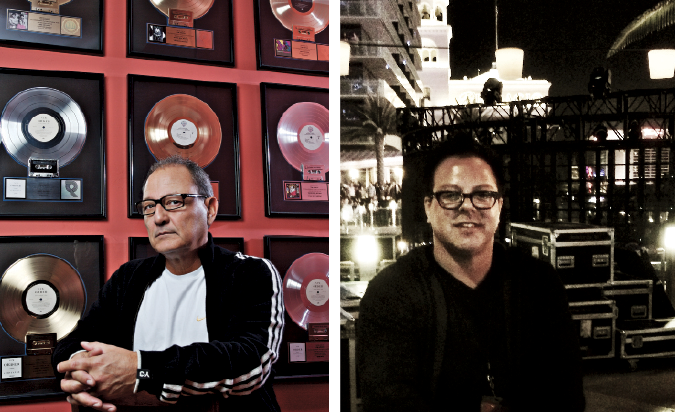 A haute read you might’ve missed this week from The Daily Coterie: Those tunes piping out of the Javits Center speakers aren’t just any old jams—they’ve been curated by Tom Atencio and Ryan Ayanian, music industry pros who’ve brought their musical expertise to Coterie for two years. Like what you’re hearing? Read on!

How did you become the go-to music guys for Coterie?
Tom Atencio: This relationship started out with us supplying ENK with three days of interesting music. Before, they worked with DJs and other pre-recorded music, but ENK decided they wanted something a bit more contemporary. They asked us to create something special, so we started out supplying them with enough licensed, focused music to last all three days. We make CDs as takeaways for attendees, too.

What are your musical backgrounds?
Tom: I co-founded a record company at MCA, Backstreet—we had Tom Petty and the Heartbreakers on it, and we did soundtracks for Universal Pictures movies. Then, I went into personal management for New Order, Jane’s Addiction, and No Doubt. I also co-founded Lollapalooza. Then, Ryan and I started our own music services and consultation company, Curasi.
Ryan Ayanian: I was involved in publishing at RayGun when I was younger, then I did a lot of freelance music work. I was also a music director for Puma. Tom and I worked together managing bands for years; that’s how we paired up.

Impressive! Tell us some fun tales from being in the music biz.
Ryan: A few years ago, a friend asked if I wanted to come visit some of her friends in the studio. Those friends turned out to be the Rolling Stones. I spent six hours watching them record a song. Mick Jagger fixed me cocktails. I still can’t believe it happened!

How does good music affect the vibe at Coterie?
Ryan: If there’s pleasant music around, it psychologically and subliminally leads to a happier environment. If you’re stuck in a booth or walking around hearing pounding house music all day, it affects you in a negative way. The idea is to create a soothing, pleasing, yet sonic environment.

What goes into crafting the perfect playlist?
Ryan: As a starting point, I thought, “What would I want to hear if I had to be at the Javits Center for three days?” I wouldn’t want to hear house music or pop all day long! So I came up with a template of peaks and valleys of music. I start each morning with Motown, New Soul, and R&B; later in the day, we get into more eclectic fare, like ’80s tunes, and then we play some house music.
Tom: Coterie should be a stimulating place! It’s not just about writing sales; it’s also about making contacts, running into people, and discovering new things.

What types of songs make the cut for Coterie?
Ryan: It’s a delicate balance: it’s got to be a great song that’s clean and not too jarring. We want people to either listen and enjoy it, or not listen and not be bothered by the music.

Do you walk the show floor to get opinions on your musical selections?
Tom: Yeah, it’s important to talk to the vendors, to see what they like or don’t like. It’s also exciting for us—seeing clothes and talking to the people behind them; it sets our creative wheels turning. We also walk around to make sure the music volume is appropriate.

Which artists featured in past seasons have become a big deal?
Ryan: Little Dragon, Zola Jesus, and Milosh, who is the singer of RHYE.

How do artists benefit from having their music play at Coterie?
Tom: Everyone at Coterie is a tastemaker. Some people we’ve included in the first set of CDs we offered as takeaways were brand-new then, and are now getting more press and play on the radio. Niia, who we’re playing this season, was featured on Joie’s blog a week after we secured her song for Coterie. And she doesn’t even have an album out yet!
Ryan: Bands are clamoring to get on these albums! We’ve actually gotten to the point where we’re turning artists down.

Wow! How do you usually find these artists?
Ryan: It’s a trade secret! Let’s just say it’s a daily process.

Highlights from destination: miami by COTERIE and...

The Latest On What’s Ahead at COTERIE...