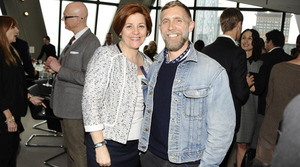 (NEW YORK) Political discourse as lunch banter, for a roomful of fashion folks? Yes, you read correctly: Cosmopolitan’s Joanna Coles played hostess with the most, per usual, to councilwoman and maybe-mayoral Christine Quinn and a solid set of industry names. The crowd hobnobbed before taking their seats, with some ambling over to the windows to take in the sweeping floor-to-ceiling views of Central Park (44th floor, baby!) Steven Kolb chatted with KAUFMANFRANCO’s Ken Kaufman, the takeaways of which include Kolb’s fetching blue suit that Kaufman raved aplenty about, and a very exciting, very high-flying collab on the horizon for Kaufman’s brand.

“Fern’s here. Now we can eat!” said Kolb happily as Mallis entered the room along with a few stragglers like Rachel Roy (love those dusky rose trou!). Mallis caught up with Barneys’ Danielle Vitale, discussing her upcoming projects in the pipeline (The Daily heard about a few of them over salad, and just trust, they’re worth looking forward to!). Across the table was a jean jacket-clad Philip Crangi, Maria Cornejo was in the fold as well. From the Barneys klatch in addition to Vitale? Mark Lee, situated one table to the west with the likes of Derek Lam, Cosmo’s recently-minted fashion director, Aya Kanai, and Financial Times chicette Vanessa Friedman.

A table away, Roy gabbed with mealtime neighbor Desiree Gruber during the meal; Nicole Miller also took up residence a few seats away. Around the bend (of the round table, that is) was Isaac Mizrahi, who’d experienced that moment of being perplexed over the Hearst elevators on his way up (which involve punching one’s floor number in before boarding for a hands-free ride.)

Quinn then took to the podium, competing quite effectively with the three-courser being nibbled on throughout her lively, hamming-it-up briefing on her mayoral platform.  Calvin Klein’s Malcolm Carfrae was first to pipe up with a quandary for Quinn, inquiring about her top priority should she land the gig. The answer? “It’s gonna be a long first day, whatever that is!” Quinn said with a trademark guffaw. More specifically, police-related matters first, then a major expansion of affordable housing in the city. (Expect “middle class” for the crop of new housing stock to be defined as $80K to $130K, roughly, FYI.)

Also addressed during Quinn’s Q&A: how her candidacy as the first female and gay mayor affects press coverage of her campaign (credit goes to Coles for that query), plus Quinn’s stab at the criticism over her chumminess with Mayor Bloomberg. “You wouldn’t expect the [people holding the] top two titles in any of your industries to fight constantly, would you?” Quinn asked. Depends which editrix you work for, cheri…

Besides Coles, turns out Tim Gunn is a major Quinn fan, asking the mayoral hopeful what the room could do to get her elected. Committees, committees, committees, apparently! Now, which designer is already whipping up the first Quinn for Mayor capsule collection of T’s? Anyone?
ALEXANDRA ILYASHOV

The Women’s Committee of The Central Park...

The Daily Wonders…How’s Your Beach Bod?

Nadja Swarovski On Her All Time Fave...

Nadja Swarovski On Her All Time Fave...

Look Of The Daily: Leslie Mann In...

Look Of The Daily: Leslie Mann In...