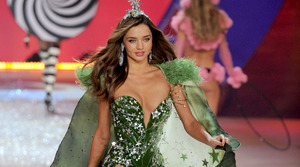 (NEW YORK) An angel’s lost its wings! After ongoing rumors of her impending departure, model Miranda Kerr finally confirmed to The Sydney Morning Herald today that she would be ending her contract with Victoria’s Secret. While some anonymous sources have cited her as “difficult” and “not a big seller” to Us Weekly, the 29-year-old mother of a toddler (Flynn, age 2), Kerr claimed she’s no longer in the right place for the demanding schedule and lengthy contract that working for the lingerie brand requires. She also denied the reputation jabs to the Aussie paper: “I’m sure anyone that’s worked with me would agree that’s not true.”

Kerr also cited a slew of her own projects as rationale for leaving the VS stable of mods: she’s got her second book, Empower Yourself, and skincare line KORA, which recently inked a distribution deal with Net-A-Porter’s new beauty division. Plus, Kerr’s got a heavy presence on the campaign front: Kerr is currently fronting ads for Mango, Reebok, and Qantas airlines, the latter of which Kerr lends her face to a different kind of wings. Looks to us like Kerr might be paving the way for more personal branding projects to take flight. Why not, after 17 years of strutting the catwalk?