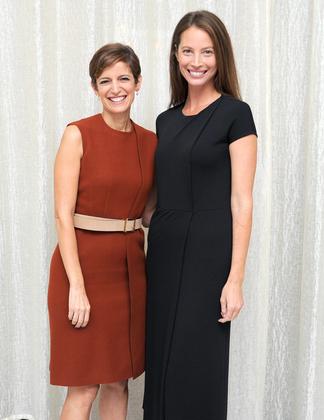 Two of our favorite women in the biz, Christy Turlington Burns and Glamour EIC Cindi Leive, sat down for a Q&A last night at Stella 34 Trattoria in Macy’s Herald Square flagship in Manhattan. Turlington is the face and bod of Calvin Klein Underwear’s current campaign, and the skivvies label hosted the event in support of the iconic mod’s non-profit organization, Every Mother Counts (EMC). Leive opened up the conversation asking Turlington Burns about working with Calvin Klein since 1988 (first shot by Irving Penn) and her own astonishment with having a relationship with the brand to this day. “I don’t think I’d be in this realm of my career at all!” she told the crowd. But the real focus of the evening was EMC, a campaign to end preventable deaths caused by pregnancy and childbirth around the world.  A few more nuggets Leive unearthed? Turlington Burns loves Instagram, her kids sorta kinda know about the career that put her on the map, and she’s running the New York Marathon next month on the EMC team with Calvin Klein as their sponsors. (Leive joked that she’s also running the marathon, but will be a “small dot in [Christy’s] rearview mirror.”) Would she consider appearing in a Calvin Klein Underwear campaign in 10 years? Don’t count her out. To that we say…we are counting the days.

Which Male Mod Brought Home The Most Bacon?