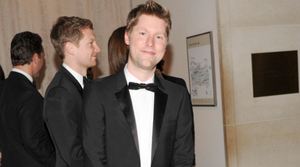 (NEW YORK) Christopher Bailey is going to be very busy chez Burberry. The Brit designer has been named CEO in addition to his design role as chief creative officer. Bailey replaces Angela Ahrendts, who served in the role since 2006, and in 2012 was reportedly the highest-paid CEO in the U.K. with a salary of $26.3 million.

Ahrendts has been tapped by Apple for a newly created senior vice president position, where she will oversee retail and online sales starting in the spring. Ahrendts is the latest fashion executive hire by the tech giant, after Paul Deneve stepped down as CEO of Yves Saint Laurent last July to join the company as an executive working on special projects. Although shares have slipped 7.2 percent on the London stock exchange according to WWD, Burberry’s revenues have climbed 16.8 percent in the first half. Bailey is a whiz at design; let’s see if his business prowess in his new executive role matches his aesthetic talents!

Naeem Khan Says 'I Do'

Take A Party Skirt For A Spin

Who Will Replace Raf Simons at Calvin...