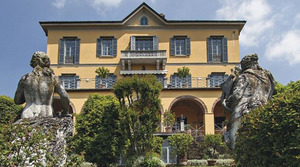 (NEW YORK) Christie’s is preparing to auction off a former Voguette’s belongings. According to a press release on Christie’s website, the auction house has acquired a private collection of antique paintings, furniture, Maiolica ceramics, and sculptures owned by “one of Europe’s most accomplished former fashion editors,” who’s worked at Vogue Italy, Vogue France, and Harper’s Bazaar Italy. However, the press release does not disclose the owner of the impressive nature-inspired collection. Upon further investigation, a spokesperson for the company informed us the onetime editrix will “be kept secret.”

Dubbed “La Rosa di Montevecchia: An Italian Villa,” the sale will comprise over 200 lots—all of which were housed in a palatial 18th century Italian villa off Lake Como. Some highlights up for grabs? A pair of late 17th to early 18th century paintings by Angelo Maria Crivelli estimated between £6,000 and £8,000 for the pair, 18th century carved wood lambs estimated between £1,000 to £1,500, and an oil painting of Orpheus charming the animals by a follower of Jacob Bouttats, estimated between £5,000 and £8,000. The auction is slated for 1 p.m. on July 1st at Christie’s South Kensington in the U.K., and is expected to bring in over $547,000.