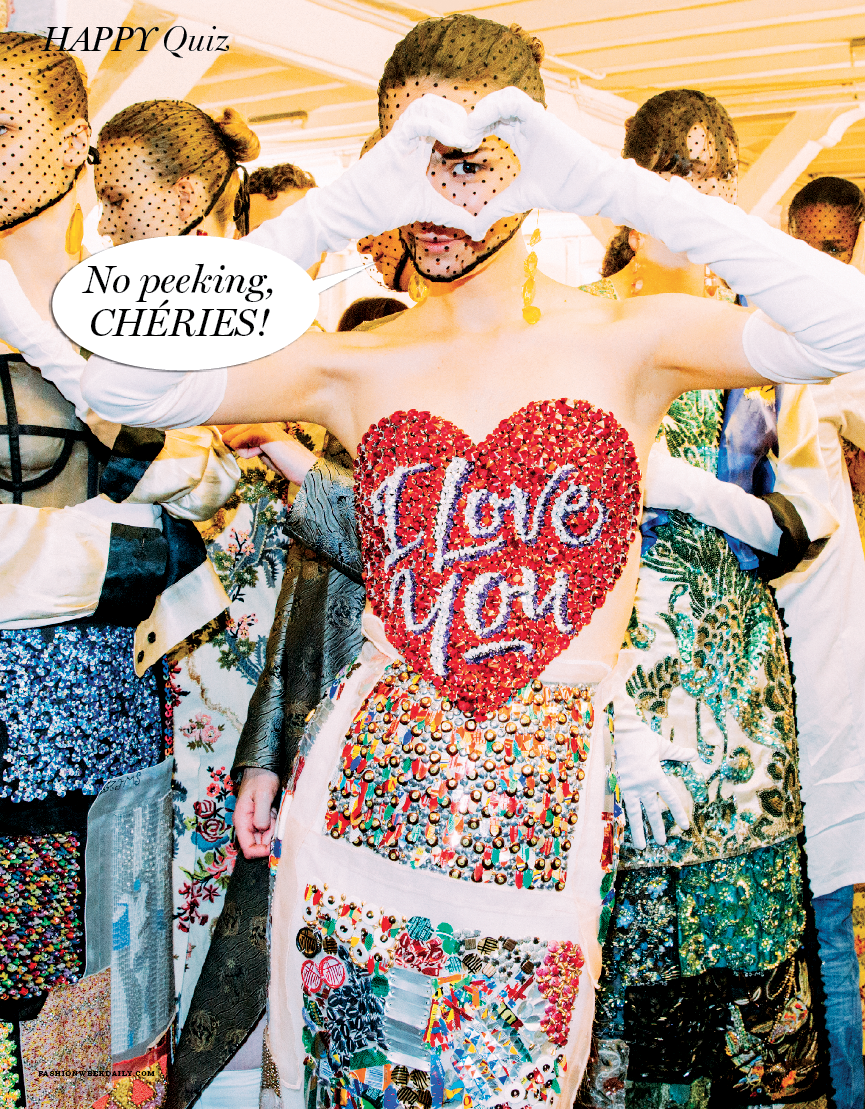 Muscling your closet into shape doesn’t mean you’re ready for the front row. Let’s test your fitness, shall we?

1. To celebrate his fortieth this August, Riccardo Tisci…
A. Trademarked his salt-and-pepper stubble.
B. Binge-watched Ab Fab; sketched some bulky sweaters.
C. Flew to Ibiza and partied with Kanye West, Kate Moss, and Justin Bieber.
D. Got a Givenchy ankle tat.

2. The following is an actual quote from Tavi Gevinson’s interview with New York magazine:
A. “What if I go to New York and I get caught up and I become a horrible person?”
B. “When you’re doing a magazine interview, it’s good to remember that you are not actually the center of the universe. Like, at all.”
C. “I hate being heartbroken, but who better to discuss it with than Taylor Swift?”
D. All of the above.

5. Ryan Rafferty’s Wintour–y musical features…
A. A “Let It Be”–ish ditty about Kim Kardashian called “Let Her Die.”
B. A scene in which André Leon Talley and Anna lament the horrors of casual wear.
C. A Sally Singer–ish character with a case of the Mondays.
D. Eva Chen flashing a peace sign.

7. Alexander Wang moved his show from Brooklyn back to Manhattan because…
A. Living in Brooklyn is so F/W 2014.
B. Schlepping to Brooklyn during the Polar Vortex gave us PTSD.
C. He showed at the Navy Yard and wasn’t feeling navy this season.
D. Anna said so.

10. Why did The Times’ Vanessa Friedman become a fashion writer?
A. Because she failed her med school exam.
B. “By mistake.”
C. Because she was coaxed into it by her bestie Sally Singer.
D. She was divinely inspired by Cathy Horyn.

Mostly A’s
All those crunches paid off! Your abs are as firm as Marc’s. Can we feel?
Mostly B’s
Long and lean, with just a touch of plush. Have you considered talking to Victoria’s Secret?
Mostly C’s
It’s called Tracy Anderson, chérie. The best $800 a month you’ll ever spend!
Mostly D’s
Tracy is only the beginning: Call up André Leon Talley immediatement and get the name of that Duke University médecin he touted in Vogue. No, really.