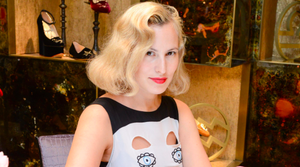 (NEW YORK) The most whimsical accoutrement purveyor on the block is getting down to business: Charlotte Olympia is rolling out a duo of office-ready new collections on June 14. The new lines by designer Charlotte Olympia Dellal, one for handbags and one for shoes, are suited for pairing with suits and will swap her trademark cheeky aesthetic for more restrained, pared-down luxe.

The carryalls will come in four variations, such as a structured flap-closure style, a clutch, and a tote, which range from $1,195 to $2995. The kicks include pointy toes and leopard print, among other things, and and will be priced at $635 to $896. The Brit shoe whiz’s trademark playfulness isn’t completely lost: the heels will all feature modest PVC cutouts for a bit of feistiness. Plus, the relatively buttoned-up chaussures will be packaged in a briefcase-esque box, paired with a pair of tights. Corner office ready, indeed!

For loyalists of the designer’s signature kitsch factor, Charlotte Olympia debuted a spate of decidedly crafty looks in her “Shear Delights” collection last week, which launched online on March 3.