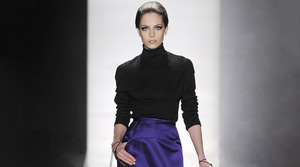 (NEW YORK) Another day, another name change. Today, Chado Ralph Rucci announced the brand will officially drop “Chado” and be called “Ralph Rucci” going forward. The company originally launched as Ralph Rucci in 1981, introducing the Chado label in 1994. “Chado”, meaning hot tea in Japanese, is a nod to the Japanese tea ceremony of the same name that applies meticulous attention to detail—something Mr. Rucci knows a thing or two about.

In the past year, the company has seen a fair amount of change. In June 2012, Rucci hired The Aronsson Group chieftan Jeffry Aronsson as his CEO. Three months later, the company pulled out of New York Fashion Week amidst rumbles of financial trouble. However, Rucci made a runway comeback in February, sending out an edgier lineup appealing to both his core customers and a younger demographic. Aronsson told WWD the name change is “the start of a new chapter toward securing Ralph Rucci’s place as the global American luxury brand and business.”
MARIA DENARDO

Women Vs. Fashion: Control Issues, Anyone?!