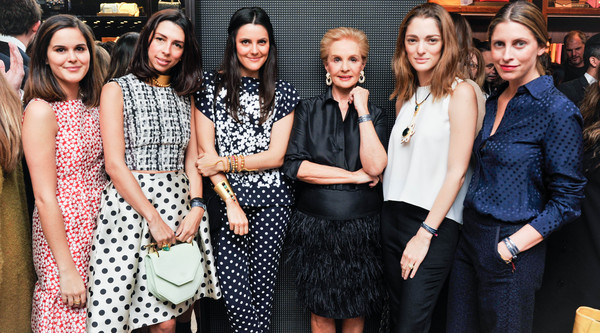 Girl power was in full effect last night at CH Carolina Herrera’s Madison Avenue store, as Mrs. Herrera hosted a cocktail party with Paula Mendoza, Eugenia González Ruiz-Olloqui, Giovanna Campagna, and Sofia Sanchez Barrenechea to celebrate a limited-edition leather bracelet the designer created for Project Paz. “Her daughter [Carolina Herrera de Báez] hosted our first event so they’ve been supporting us from the beginning,” longtime Paz supporter González Ruiz-Olloqui told us. “We couldn’t ask for anything better. They approached us and came up with the idea. They’re also giving us 100 percent of the proceeds!” The bracelet will support the New York City based non-profit that helps the Juarez community in Mexico. “I love Paz,” Mrs. H told us. “I took over helping the organization from my daughter because she lives in Spain now. I love what they are. It’s hope and peace. Those two words together for me are important. We need peace in the world and hope.”

Chic Video: Behind The Scenes Of Dolce & Gabbana's Men's Campaign for Spring

Project Paz Gets To The Heart Of...