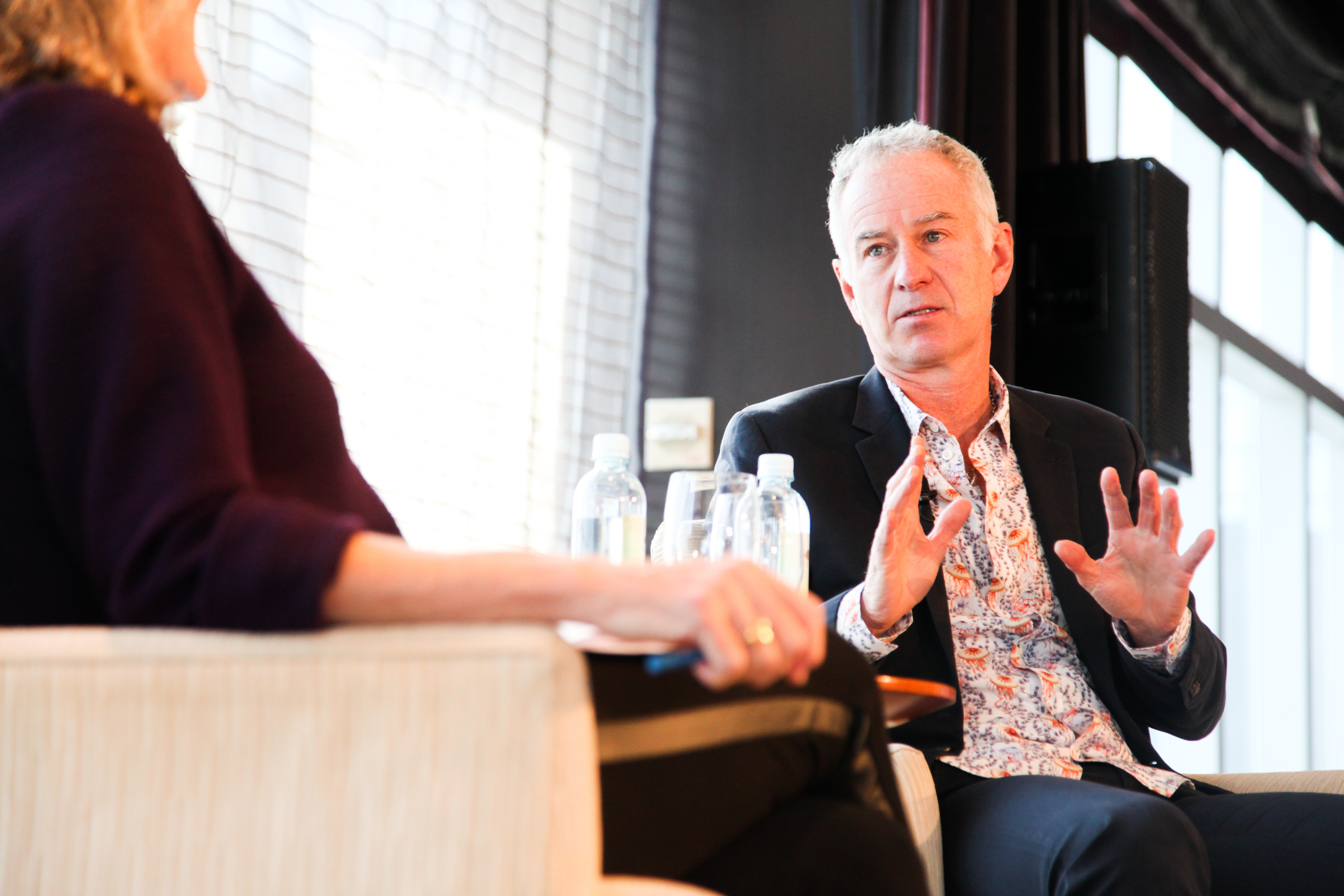 Everybody has an opinion on tennis great (and proud New Yorker) John McEnroe, but at this week’s Central Park Conservancy Women’s Committee luncheon at the Mandarin Oriental, he had the crowd in the palm of his hand. The annual event, which raised $186,000 for our beloved park, welcomed Gillian Miniter, Karen LeFrak, Fe Fendi, Deborah Roberts, Hilary Geary Ross, Eleanora Kennedy, Anna Safir, and more for a fascinating and funny sit down chat with McEnroe and Lynn Sherr. On the menu? Salmon, plus plenty of dish on McEnroe’s tennis, thoughts on what’s wrong with New York City these days, and his infamous reputation on the court. Even his mom, Kay McEnroe, was there to keep an eye on her boy, who also revealed which current tennis player he’d like to go up against. Hint: We know who Anna would be rooting for. We’ve put together some highlights from this entertaining conversation…

On New York City life: “I was fortunate at a young age to move into Queens; I lived in about five houses in Queens from age four to eighteen. It was always my goal as a young boy to sort of make it in tennis and make it into Manhattan. There was this sort of incredible energy there. I took the subway for four years to get to high school, so I saw a lot of things. There are so many great things about New York, but if I have to sum it up, there’s an energy here that’s incomparable. You can do anything and everything. In my opinion maybe the taxes are too high at times, but we owe it to the city that you don’t want to leave.”

Central Park: “I don’t play on the courts there that often, because I have this academy I’ve been pushing on Randall’s Island. I live across the street from the park and when I go to bed at night, I hear crickets and some cars occasionally, but mostly crickets. You look out the window and its unbelievable. My kids have broken bones in there.”

The irritations of New York: “There are not a lot of things I don’t like about the city, but I don’t like that it is so overrun by tourists. They don’t understand how to walk. I love to mountain bike, so I used to ride in the park. But this has gotten to be a problem. There are so many people and lunatics that go around like its Tour de France or Tour de Central Park. This may be hard to believe, but I am a very competitive person. When I used to go out and ride in Central Park, I would go out and see how many times I could go around. It has gotten completely out of hand and I don’t know how I feel about the whole bicycle thing anymore. It’s an accident waiting to happen.”

On his past rep: “Someone did a poll of the most hated people in the world and Adolf Hitler was number one and I was number two; I think we’re taking this tennis thing a little too seriously.”

Women’s tennis players: “Starting with Venus and Serena Williams, if you thought of any spectacular story in the history of any sport, you would be hard-pressed to come up with a better story than two girls from Compton, California, which is like our equivalent of Harlem, growing up and succeeding in tennis, which is difficult because it’s mainly white, elite, and expensive. Arguably they’re two of the greatest women in any sport. I think Serena is the greatest tennis player of women’s tennis. When I was 16, I went to Mary Carillo’s house, we grew up about four blocks from each other and we won the mixed doubles together. But I met Billie Jean King for the first time; she’s a fireplug. I always thought she did more for women’s sports than anyone in the world.”

Men’s tennis players: “I’m looking for the next Michael Jordan to play tennis. You look at basketball players; those are the best athletes in the world. I love this sport, I’ve done it a lot, and so I’ve made it my life’s work to save the sport of tennis, in America, at least. Followed closely by keeping Central Park clean.”

Tips for weekend players: “Try to enjoy the experience and have some fun with it. I find that people in tennis try to do more than they’re capable of. Try to stay within yourself a little bit. The first things I tell my kids are to try their best, and don’t beat themselves. I think tennis is really important in a way for our society; it’s like our version of chess in the ’70s. I used to play a lot as a kid, and it really taught me to think ahead. Tennis is something that we can use in that way. It’s sort of like chess while you’re running. You have to think ahead about what you’re going to do next, what you’re doing presently, and even what you’ll do a few shots ahead.”

Life lessons from tennis: “It’s pretty safe to say that you often learn from losing or from something difficult rather than something expected. I think that’s really important. Tennis is really difficult because you’re out there by yourself. The other part that’s really good about tennis is that it forces you to learn levels of concentration and keep you on one task. In today’s society, that’s surprising. These kids have attention spans of, like, amoebas, with all the social media around.”

A prospective career in politics: “I thought about that because I started come into contact with a lot of people in Congress, but finally I came to my senses. I thought that we live in a little bit of a fishbowl in tennis, but this level is total insanity. I know this is hard to believe, but I don’t think I have the temperament for [politics]. It’s like golf: I usually run out of clubs by the time I finish. I think that’s politics.”

Dream matchup: “Something that I would like to do is play Roger Federer at Wimbledon. I don’t know how well I’d do, but I think I would be successful in intensity. We would get under each others’ skin a bit, which we used to try to do.”

Personalities: “There are some great personalities; [Rafael] Nadal is a great personality and [Novak] Djokovic I like quite a bit, too. When you’re playing a one-on-one sport, there needs to be a bit of a personality. Roger Federer is the most beautiful tennis player I ever saw play tennis. When you look back, you feel a tiny sense of pride, like you’re a part of history.”

Rodeo Drive To Honor Burberry With Walk Of Style Award