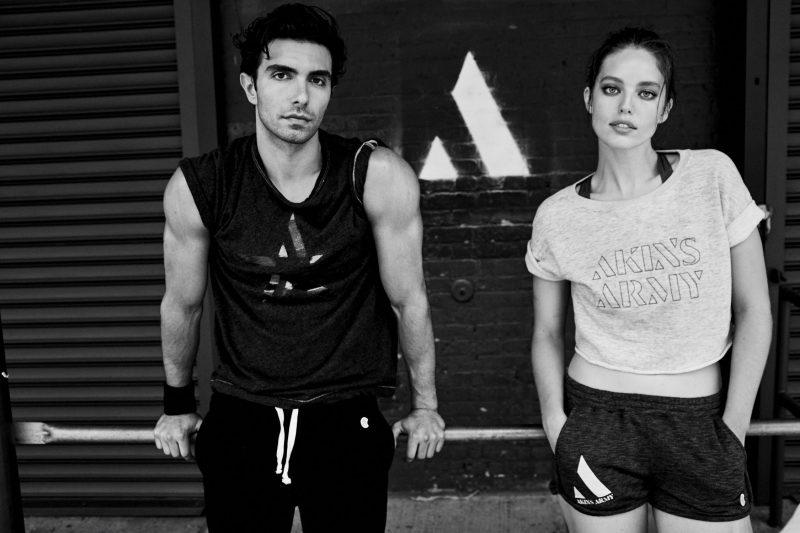 From David and Victoria Beckham to Karlie Kloss and beyond, celebrity trainer Akin Akman is responsible for the envious bods of many of your favorite celebs and models with his Akin’s Army workout method. Now the New Yorker, who starred in Todd Snyder’s Fall 2016 campaign, is tapping into fashion on a new scale with the release of a limited-edition capsule collection with the designer titled “Drop One.” We caught up with Akman about the range.

Akin, how’d you meet Todd in the first place?
I met Todd through Trey Laird. I modeled for his Fall 2016 campaign. He brought on a bunch of urban guys and I was the fitness guy.

How’d you decide to team up on a collection?
After I shot for him and the campaign launched, he did a SoulCycle class with me with a lot of influencers, his team, and some publicists. He really liked what we did and thought it was awesome. A bunch of the people who I brought wore these shirts for the ride, so Todd had the idea to do something together. We came out with a 50-piece shirt capsule for Akin’s Army. We had a bootcamp launch to sell the t-shirts, and before we even brought them out, they pre-sold out. So he was like okay, let’s do a collection. It all just kind of happened.

What kinds of pieces will we find in the collection?
There are three women’s tanks and crop tops, three different shirts for men, and sweat-shorts for both men and women. It’s a small collection—we’re planning on doing another one as well.

How do you describe your personal style?
It’s funny because the line is really everything I wear. I love sweatpants in the winter and the three shorts that are in the line, especially the cut-off shirts, are always what I wear when I teach. It’s very me.

Do you see yourself launching your own lifestyle brand?
Definitely!

What else are you working on these days?
Right now I offer seven Akin’s Army classes a week, so once a day. I can’t really say much but at the end of September we’ll be doubling the amount of classes. So we’re growing! I’m also going to Milan in September with Swarovski—I shot a campaign for them, too.

NYFW is coming up. Fitness tip, please!
I like to say that the way I do things is you make it your lifestyle, so try to find something that really motivates you—a workout or coach that you really enjoy doing and make it a part of your daily life, don’t just train for one thing or one specific time. Constantly grow in your fitness journey.

The Scoop on EIWIL, An Eco-Inspired Apparel Brand that Fuses Fashion, Art, and Philanthropy

Emily DiDonato Is Pregnant With A Baby...