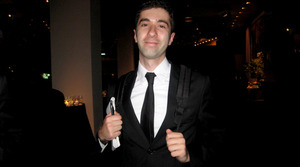 We’ve been eagerly awaiting for the news of Eric Wilson‘s replacement at The New York Times and finally have an update. WWD reports that John Koblin is joining The Grey Lady as their new style reporter. He certainly has a diverse CV, with stints at WWD covering media, media reporting at The New York Observer, and as a reporter for the sports site Deadspin, focusing on sports media. Stuart Emmrich, editor of the style section, wrote an internal memo to staff announcing the decision: “Over the past month, I have had several long conversations with John about our fashion coverage — discussing in detail how he might have approached some of our news stories differently, what other angles he might have pursued, what he would have done to try to raise them to the level of A1 – and in each case I have come away with the same reaction: Total excitement at the prospect of having him on the Styles staff.” No word yet on when Koblin starts.

Look of The Daily: Margot Robbie in Armani PrivÃ©