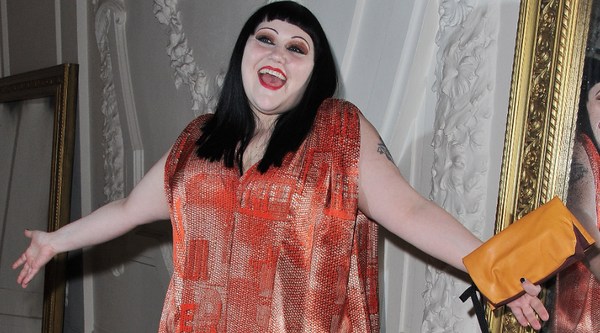 From wedding gowns to her penchant for skivvies, all the Beth Ditto-ness you’ve been dying to know…

You’re getting married this year!
My dress was cheap. I really wanted a Vivienne Westwood dress [but] I just can’t spend 10 grand on a wedding dress.

Any wedding details you can share?
We are getting married in Hawaii. Everyone has to wear white. I was like, I don’t give a sh*t! You can wear a bathing suit as long as it’s white. I just thought it would be beautiful in all of the pictures. It’s going to be really Mother Earthy and pretty.

We hear you’re obsessed with underwear. True?
Obsessed! We were poor growing up. When we were kids in school we would donate cans at Christmas and then they would give them back to us because we were the needy. That was my family. I didn’t have underwear. I had to share it with my mom and my sister. Now I know if I ever go broke again, I’ll have all the underwear that I need!

How many pairs do you think you have?
About 250 pairs. Easily.

The Kid Stayed In The Picture: Meet Desiree Gruber!

10 Biggest Shakeups on the NYFW Calendar...