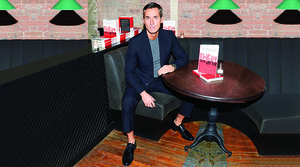 (NEW YORK) After a decade at Glamour, sockless Condé superstar Bill Wackermann hit the road for Condé Nast Traveler. With a snazzy campaign kicking off next week and a freshly renewed passport, he says his new mag’s ready for take off. He rang up The Daily after clearing customs.
BY ALEXANDRA ILYASHOV

Welcome home, Bill! Where were you?
In Mexico City talking with some tourist boards. It was quite interesting.

Presumably you’ve got your passport on you. How many stamps are in it?
Not many. I had so many stamps on my old passport I ran out of pages and had to get a new one. I think customs started to suspect I was a drug dealer or something, because I was going in and out of South America and Europe so often. Only six pages are used so far!

How’s Traveler treating you?
It’s a bit of a return home. It’s a magazine I loved and worked at 15 years ago. And now I get to work at a brand that’s such a passion point for me—I’m a big traveler myself. In my free time, that’s what I do. The opportunity to reshape a brand was just too exciting an opportunity to not want to jump on it.

What’s been the biggest shift at Traveler since your first tour of duty?
[Editor in chief] Pilar Guzman. I’ve always had tremendous respect for Pilar. She’s just a really great lady with an amazing sense of style and taste. She’s married to Chris Mitchell, the publisher of GQ—they’re one of those beautiful couples who make everything look easy.

What’s the deal with your “I am a Traveler” campaign?
It’s about refocusing the brand and expanding from one voice to the voices of many tastemakers. It’s about what unifies all these tastemakers: travel. The people that are the most fun across all categories—fashion, food, design—what they have in common is that they’re all huge travelers.

Why is Nicholas Kunz, of Nicholas K, the campaign’s fashion tastemaker?
Nicholas is an amazing designer. Her stuff is very urban nomad chic. They called her in for The Hunger Games: Catching Fire, so she’s got a lot of buzz going on right now. Oscar de la Renta, for example, also probably travels, but I don’t look at his runway and think he’s been off hiking in the Yucatan.

What kind of bashes do you have planned?
The kickoff is next Wednesday at Tertulia, and chef Seamus Mullen is a tastemaker in the campaign. We want to get people understanding that there’s a difference between a traveler and a tourist. People will show up with a passport and a bag packed, and we’ll send five guests to somewhere in the world. So bring your passport!

Still pals with Cindi Leive, we take it?
I adore Cindi. She’s great, and I miss her incredibly.

We like her too. Where do you want to travel next?
The next big trip I’m actively planning is to Africa, including the game parks in Botswana. I’ve waited a long time to do this trip, until my kids were old enough. Those trips where we need to get in line for a buffet are finally behind us.

What kind of traveler are you?
High maintenance! I have my routines. I’m a huge Diet Coke–and-ice addict. I always ask for extra ice.

Are you still going sockless?
I’ll shoot you a photo! I’ve got an amazing pair of green wingtips on right now. I’m sockless for life.

How does the sockless thing work when you’re going through airport security?
I keep two bottles of Purell in my bag. I feel like Britney Spears walking around the airport with no shoes on!

Always thinking ahead!
You know, people always think the cabin air gets you sick, but that’s not what gets you sick. It’s what you touch! Your hands are your greatest enemy when you travel: The tray and armrests probably have the most germs. I always wipe down the area around my seat with Purell.

You’ve bounced around a bit! Any Condé titles you’d never jump to?
I can’t see myself swinging a golf club anytime soon, so Golf Digest might not be the right spot for me.

What are your thoughts on Time Inc. snatching up Departures?
It’s funny—American Express’ relationship to the travel industry was such a key part of their pitch. I’m interested to see how that will play out.

What does it mean for travel mags in general?
The travel category is on fire! I’ve heard they’re consolidating or doing something over at National Geographic as well, so I hope that what we’re doing at Traveler tells everybody else to get ready. This isn’t the first you’re going to hear from us.

We don’t doubt it!

Downtown, Everything's Waiting For You

The Boys of Summer Are Back!

The Daily Celebrates the Holidays with Lands’...