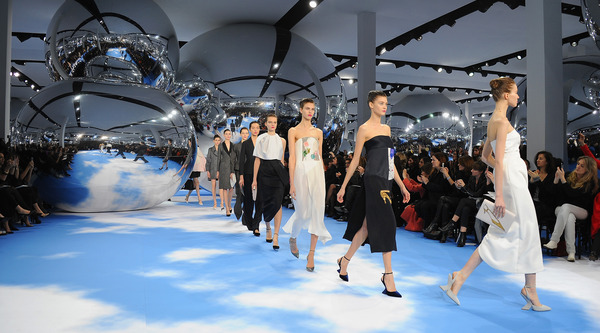 (NEW YORK) Whitewashed runways: certainly not a new hot-button topic It’s about as new as the ongoing debate about models and their (too-slight) weights. But a recent roundup by BuzzFeed contributor James Lim with five top casting directors about the lack of diversity on this seasons runways has everyone buzzing. Without further ado, we’ve broken down the oh so dishy highlights on this haute issue…

JAMES SCULLY, casting director for Tom Ford, Jason Wu, Derek Lam, Stella McCartney, Lanvin & Carolina Herrera
—”Some of the biggest names who move fashion to the forefront, like Dior, get a D- on ethnic diversity. I feel the Dior cast is just so pointedly white that it feels deliberate.”

—”Natalie Portman could complain that John Galliano was a racist, but I feel [Dior designer] Raf Simons sends the same message. I don’t know what the difference is. If I were at Dior tomorrow, there would be black girls in that show.”

—”I was also disappointed that Saint Laurent, Louis Vuitton, Chanel, and kind of every other important fashion house — not one of them were racially diverse at all this season.”

—”Versace will use Joan Smalls in their advertising, but why wasn’t she walking their show in February?”

JENNIFER STARR, Casting director for Ralph Lauren, Ohne Titel, Gap, David Bowie & the Pirelli Calendar:
—”Things seemed to have changed after the Italian Vogue all-black issue and the season right after Obama got elected, but then I feel the next season things kind of went back to the way it was.”

—”This season the percentage of new black girls was really small, so do the numbers! If there are 200 new white girls, and five break out as stars, then if there are six or ten new black girls, the statistics are not in their favor.”

—”I am really excited that there are more Asian women than ever on the runway. I would venture to say that has something to do with Asia’s economy now being second largest in the world.”

JOHN PFEIFFER, casting director for Michael Kors, Bottega Veneta, Donna Karan, Diane von Furstenberg & The Victoria’s Secret Fashion Show
—”There were so many [Asian girls] to choose from. Aside from the classics like Ming [Xi] and Xiao Wen [Ju], there were now Soo Joo, Sung Hee, and Ji Hye. They’re not just Chinese either. It’s great that designers are making those distinctions now — it’s not just an ‘Asian model,’ she’s a Korean model, she’s a Japanese model.”

—”I do think [diversity] has improved in the sense that people are more conscious about it — thanks to a lot of people like Bethann Hardison. But I think we are far from representation from what life is out there. We need to continue to make an effort.”

BARBARA NICOLI & LEILA ANANNA, casting directors for Burberry, Marchesa, Gucci, Emilio Pucci, Armani Privé & Saint Laurent
Nicoli:
—”Sometimes I notice with other casts, it’s like they were forced to put someone in because they have to. For example, I love Asian girls, but there was a moment when designers decided to put a lot of Asian girls in just because the Asian market was strong and they gave a lot of money to designers.”

—”I don’t like to talk in terms of white, Asian, black, etc., because a model is a model and that’s it. To me, if we want to talk about diversity, it’s about the model and not the color of their skin.”

Annana:
—”We don’t think [diversity improved this past season]. Diversity for a show is important as it is for life.”

—”We think we need to keep in mind that these are shows. A show needs to make you dream, and it doesn’t necessarily represent reality.”

Kate Moss Gets (Bento) Boxed In