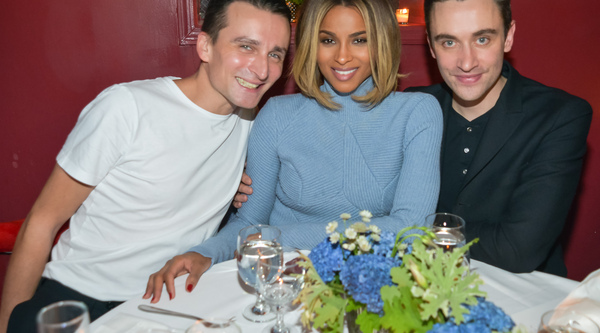 In honor of his eagerly anticipated upcoming Soho flagship store, Carven’s Guillaume Henry brought a little France to Chelsea last night when he hosted an intimate dinner at La Lunchonette for editors, stylists, and…Ciara. Braving one of the chilliest nights in recent memory to toast Henry were Leandra Medine, Mark Holgate, J Errico, Stephanie Lacava, Derek Blasberg, Scott Schulman, Madeline Weeks, Tennessee Thomas, Natalie Joos, and Miguel Enamorado, to name a few. Dinner was accompanied by a live accordion player and guitar player churning out (what else?) some of the greatest hits from France. “It’s like we’ve been transported to Paris for the evening,” we heard one editor say. The surprise hit of the night? A napkin! When guests sat down for dinner, each was treated to a monogrammed cloth napkin. Attention portée aux détails!