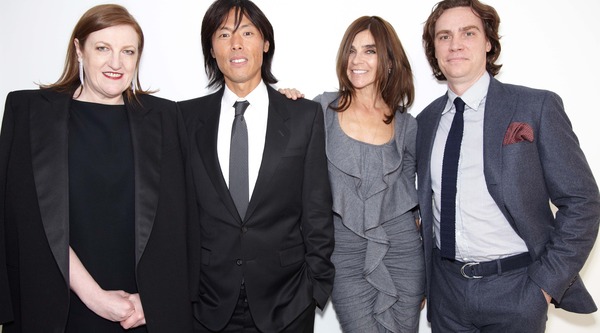 (NEW YORK) Hanging onto every saucy, often pretty poignant, bit of Franglish that comes out of Carine Roitfeld’s mouth is the norm. But add Town & Country EIC Jay Fielden to the mix at his full charm capacity, in interviewer mode, as was the case at last night’s Q&A sesh at the Hearst Tower, and Roitfeld’s newish gig as Harper’s Bazaar‘s global fashion director, and there are more CR gems to fawn over than usual. Behold the most memorable quotables below, and a glorious teaser of Roitfeld’s debut portfolio for Bazaar here!
BY ALEXANDRA ILYASHOV

Why the runway grind has become snoozeworthy:
”Shows are more boring than they were 20 years ago because there are more and more shows…sometimes [the fashion is] less risky and I love risk.”

…And then, one show can bring the magic back:
“But suddenly you see one Comme des Garçons show and you love fashion again.”

Carine Roitfeld, covert fairy godmother for show crashers everywhere!
“You cannot imagine the number of young people who come to me at the shows and just ask me, ‘Please can you help me go to see the show.’…each time I take two with me inside.”

Eschewing refinedness, one delicious soundbite at a time:
“I think bad taste gives you more ideas than good taste.”

Icon alert! (And it’s probably not who you’d expect.)
“She was not very well dressed, but Liz Taylor was an icon for me. She was the most modern person. She didn’t give a shit if people didn’t like what she was doing.”

Tech alludes her a bit, she’s quite the late adopter, and that’s OK—endearing, even.
“With CR I discovered what is the internet. Because I’m not from the internet generation. It’s not the first thing I do in the morning, to wake up and Google my name.”

It wasn’t love at first sight avec Tom Ford:
“Can you imagine we refused 20 times to meet him [during Roitfeld’s Elle France days]. ‘Who is Tom Ford? What’s Gucci? A pair of loafers? No, we’re not interested.’”

…But ultimately, it kind of was:
“Tom came [to meet us] and we just worked with him because he was very good looking and charming. That’s the only reason we worked with him, finally.”

More on that topic, in the context of her Gucci days, while shooting with Mario Testino:
“I love to push people and ideas, and with Tom and Mario, it was very easy to push. At that time, I was very impressed with the psy shaving. So I thought why don’t we do the ‘G’ there? They said, ‘No, we cannot do that, it’s not possible.’ But I said, ‘Let’s try.’ So they took a piece of paper with a ‘G’ and shaved the girl and finally it became, I think, an iconic picture.”

How her Bazaar shoot went down, in the midst of Hurricane Sandy…
“Even though it was the worst moment of the year to do that, we had a great time. It was difficult to call [the clothes] in because everything was closed downtown so some designers were very helpful. I remember Alexander Wang, his place was totally closed, and he went himself to get the clothes…Sometimes when your back’s against the wall, you have no other choice but to make it happen.”

…As a Vogue shoot transpired next door.
“We had no problem with anyone. We’d pass by and say ‘Hi, how are you?’ Everything was very civilized.”

Losing big-name talents upon leaving the cozy folds of Conde means a chance to find the next generation.
“All these photographers who had contracts with Conde Nast, it pushed me to find new talents—like Kacper Kasprzyk, who I didn’t know and hadn’t worked with.”

A solid dose of perspective on regrets and staying sane in fashion:
“Of course I’ve made a lot of errors, but none that are so big I have nightmares each night. If it’s a dress, it’s a dress—not a catastrophe. Thank God we’re working in fashion! People take themselves too seriously. Fashion drama is not real drama.”

Does Julia Restoin-Roitfeld get free reign of her mother’s silk blouses and the ilk? (Spoiler: non.)
“The first rule is if you have a daughter, never try to exchange clothes with her.”

And lastly, Carine would love it if her grandkids tapped into her Russian heritage.
“I would like it very much if they called me babuschka, but that’s very long.”