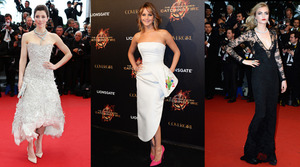 (NEW YORK) Are you getting your Cannes on? If you didn’t make it to France for the latest circuit of tapis rouge-filled festivities, there’s plenty to satiate in the gown department. Does a more glam intersection of silver screen and straight-off-the-runway eye candy exist than Cannes? Non!

Firstly, there’s major buzz behind Sofia Coppola’s upcoming flick about the theft-inspiring spoils of celeb culture, The Bling Ring, and the director donned a duo of Louis Vuitton frocks for the Cannes leg of the publicity tour. Her posse of bright young things starring in the film didn’t look too shabby for the occasion, either: see Emma Watson’s B&W Chanel couture number (plus, she chose a cranberry-hued Christopher Kane frock for another Bling Ring appearance). Watson’s costar, up and comer Claire Julien, exemplified the sauciest side of white in a perforated Balmain getup.

As for the models hitting up Cannes this time around, Cara Delevingne seems to be diffusing the drame as of late with some smoldering outfit picks (or, at the very least, is looking incredible as the scrutiny and media attention transpires). Behold Delevingne in Burberry, all black lace and boudoir-ish hair and smoky eyes—in a similar vein, the mod opted for a Roberto Cavalli outfit with sheer-paneled trou. Liya Kebede also did well going the Cavalli route (hers was also vamp-ish, transparent, and noir). But Doutzen Kroes has arguably stolen the show among the lithe and around-six-feet-tall set: behold that iridescent peachy Versace Atelier number worn to Le Passe premiere, or the vampy white Calvin Klein Collection she opted for at the premiere of Jimmy P. (Psychotherapy of a Plains Indian). Also on a Calvin Klein kick: Paz Vega in a rouge ensemble, Naomie Harris’ refined sexiness in a neutral number avec cutouts.

When it comes to Cannes consistency, the award just might have to go to Jennifer Lawrence, who’s been loyally parading fresh Dior looks carpet after carpet (she is the brand’s current face, after all). Thus, lots of B&W numbers; making Raf proud, J.Law! Earlier in the week’s festivities, Julianne Moore picked a shimmery lilac-skirted Dior, with a sculptural twirl of a train. Rooney Mara’s was having a Dior moment of her own (also black and white, sporting that asymmetrical white ruffle top that proved quite memorable when it pranced down the runway earlier this year). Also in Mara’s playbook: a sliplike nude Calvin Klein Collection dress worn to the brand’s Women In Film din on Thursday, and the leather-trimmed Vera Wang number in (you guessed it!) shades of B&W.

Alas, that’s just the first few days worth of Cannes fashion highlights. Stay tuned for another dose as the step-and-repeats continue all week…
ALEXANDRA ILYASHOV