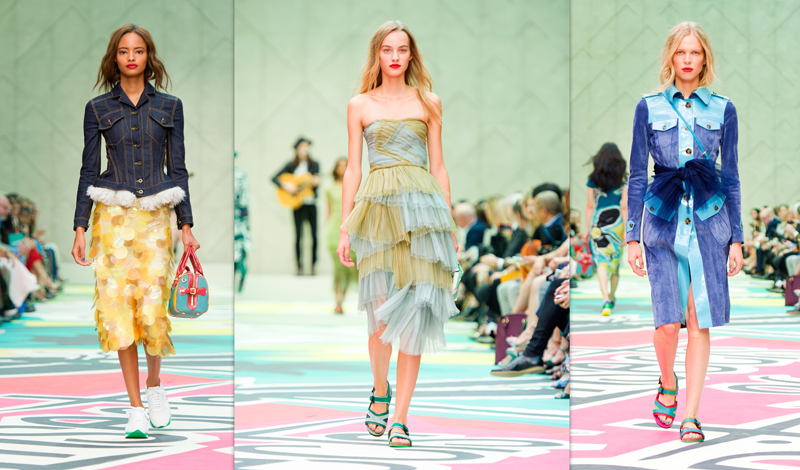 It was all about the birds and the bees chez Burberry this season, but if you think that means this collection was all about sex, think again. Instead it was about rebirth and perhaps a bit about taking flight. Now that Christopher Bailey is not only the brand’s creative director, but also the newly minted CEO, there is quite a lot of change afoot at the British brand. After Angela Ahrendts left her post as CEO to head to Apple Inc., having been at the helm of Burberry since 2006, many (including Burberry employees) worried about the future of the brand. Ahrendts was widely credited for bringing commercial success to Bailey’s vision. However, this collection felt wearable, laid-back, colorful, and cool. In a word: sellable.

But that’s not to label the collection with the dreaded antithesis to creativity that the word “commercial” has come to mean. Denim jean jackets came in corset-like silhouettes described in the notes as “wasp waists”. On the collars and hems were peeps of white shearling. A pencil skirt and dress came covered in giant, champagne-colored paillette sequins, layered tulle dresses came in soft pastels (even the colorful trenches were tied at the waist with tulle), and lush suedes were done in bright colors like deep purple, turquoise, and even royal blue, trimmed in baby blue leather. The bees found their way onto bags, the shoulder of a trench or on the pattern of a skirt, but this collection was really all about texture and color. Oh, and speaking of sellable: outerwear and bags from the collection are available to purchase (and personalize) on Burberry.com until September 29th, and pieces from the runway will be made to order for delivery within nine weeks, which means you can get your hands on the latest looks before they even hit stores. Who said Bailey wasn’t a businessman?

Who Will Replace Raf Simons at Calvin...