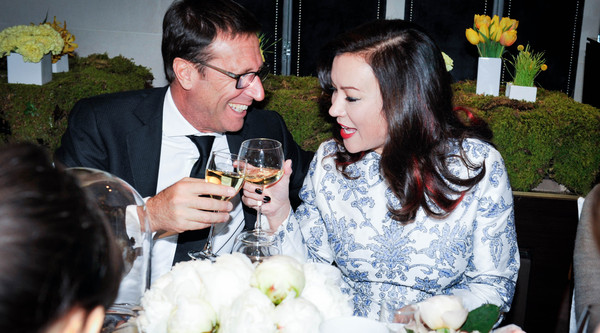 (NEW YORK) The city of New York plays host to many dinner parties, but amongst the most entertaining guests Manhattan has to offer are those of the haute jewelry category. At last night’s Bulgari press dinner, a slew of editors and stylists took haven from the cold night in the brand’s Fifth Avenue boutique. However, the jewels weren’t the main focus of the evening; the dinner paid its dues to the women who have embodied the Bulgari brand over the years.â€¨â€¨

The likes of Eric Damon, Noah Levy, Rickie De Sole, Selby Drummond, Alexis Bryan Morgan, and Marion Fasel filled the seats at the lengthy dinner table, at the center of which sat Bulgari’s CEO Alberto Festa. The stylish set were joined at the table by a myriad of bijoux; an emerald-encrusted Serpenti was coiled on a bed of moss, while a hefty cocktail ring took shelter under a glass dome and a floral neckpiece called out for attention. Between courses, guests, accented their outfits with the gems and snapped Instagrams for their various accounts.â€¨â€¨

Photos of Elizabeth Taylor, Grace Kelly, Marisa Berenson and Sophia Loren were spread on the table and the Diva Collection, inspired by the aforementioned icons accessorized the room as well. An avid collector of new and old Bulgari pieces, Jennifer Tilly, delivered a monologue from Taylor’s tome, My Love Affair With Jewelry. In her breathy voice, the Oscar-nominated actress (who’s currently performing in Grasses of a Thousand Colors at New York’s Public Theatre) recalled countless gems from Taylor’s life. “Richard Burton once said about [Taylor], ‘I introduced her to beer and she introduced me to Bulgari,’” she recalled. Adding, “according to him, Bulgari was the only word in Italian that [she] knew.”

Following Tilly’s captivating speech, diners fretted over the chilled limoncello shot that appeared in front of them, but raised their glasses and drank the sweet liqueur. The rest of the evening was a infused with many Italian touches: flowing glasses of wine, beautifully-presented branzino, and hours of boisterous conversation. Meanwhile, Tilly entertained her seatmates with tales of obtaining her various jewels, dishing that she moonlights as a contributor to Bluff magazine (a glossy dedicated to the art of poker) and reminiscing on the times she’s met Elizabeth Taylor in person. Dessert was a pyramid of amaretto-flavored mousse, a subtle nod to Taylor’s esteemed Cleopatra role and a sweet note to end the evening.
DENA SILVER

How Did Jourdan Dunn Get In Shape For Tonight's VS Show? Ummmm…