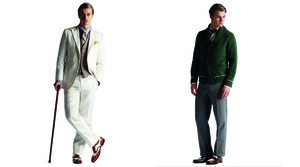 (NEW YORK) Get ready for the avalanche of Gatsby-inspired goods on the way: Everyone’s gearing up for Baz Luhrmann’s May 10th release of the much-anticipated remake of The Great Gatsby, starring Carey Mulligan and Leonardo DiCaprio. Mulligan graces the recent cover of Vogue decked in Deco, while over at Tiffany & Co., a Gatsby collection is on the way. On the dashing bloke front, Brooks Brothers has released images of their new Gatsby collection, available starting today.

If anyone can do the Tom Buchanan-esque WASP, it’s Brooks Brothers. The brand is synonymous with preppy American style and wealth, and has been designing clothes since the era in which the film was based. In fact, the looks weren’t simply based on 1920s style: they new duds were designed based on the brand’s actual archives. Why? Because Brooks Brothers was one of the initial arbiters of Gatsby-era look. The actual costumes, designed by Catherine Martin, will be on display in select Brooks Brothers boutiques such as the New York City flagship on Madison Avenue, Beverly Hills Rodeo Drive, London, Milan and Tokyo. Now you, too, can look as dapper as Mr. DiCaprio.

Woof! Barking It Up At ASPCA's Bergh Ball