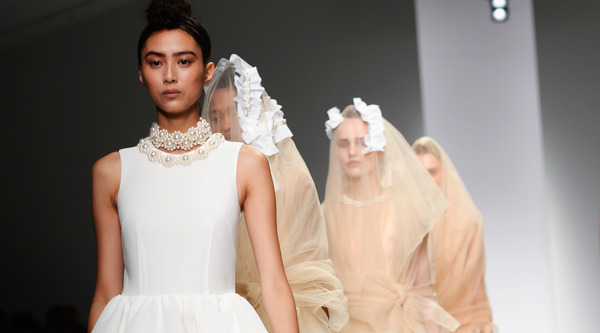 (NEW YORK) A slew of designers are getting the British Fashion Council’s stamp of approval. BFC’s NewGen council is sponsoring seven young labels’ walks down the catwalk during London Fashion Week in February. Lucas Nascimento, Simone Rocha, Marques’Almeida, and 1205 will have runway shows courtesy of NewGen, while Ryan Lo will receive sponsorship funds towards a presentation of his collection.

In addition, both Claire Barrow and Danielle Romeril have been granted resources to show in the BFC’s exhibition space. The panel that selected the handful of lucky designers included Caroline Rush, CEO of the BFC, Kate Phelan, creative director of Topshop, and designer Mary Katrantzou, who’s a NewGen alum.

The program was was founded in 1993 by the BFC, providing a platform for emerging designers to kickstart their businesses. In 2001, Topshop showed its support of burgeoning designers by signing on as NewGen’s official sponsor. Former NewGen winners include Alexander McQueen, Matthew Williamson, Christopher Kane, Marios Schwab, Erdem, and Meadham Kirchoff.

Lindsay Ellingson's Next Walk Will Be Down The Aisle

Dining at Daniel With Relais & ChÃ¢teaux

This Is, Hands Down, the Best Accessory...