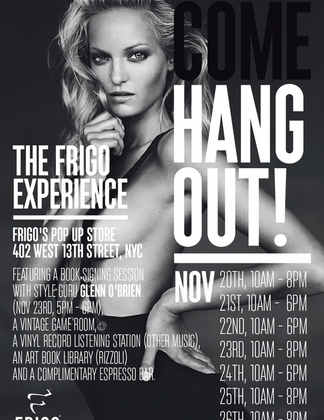 Need to revamp your underwear drawers, boys? FRIGO, designed by Cortney and Robert Novogratz, is celebrating the launch of its luxury underwear line in the U.S. with a pop-up shop on 402 West 13th Street in New York. Swing by now through November 26th to spruce up your skivvies. But that’s not all that will be on offer: Saturday Glenn O’Brien will be on site signing copies of his new book The Cool School. Also of interest? A lifestyle area tricked out with a lounge, espresso bar, a Rizzoli-stocked library, a projection wall for short films, a vinyl record selection from Other Music, and an interactive photo booth. Head down to the lower level of the 3,500-square-foot space to play in the vintage game room complete with an old school Pac-Man game and original Bonzini foosball table. Head over to the space between 10 a.m. and 8 p.m. to check out what The New York Times has dubbed “Victor’s Secret”.

Thom Browne Rolls Out A Collection Of Classics