Big Plans For Bergdorf's: What Does President Joshua Schulman Have In Store? 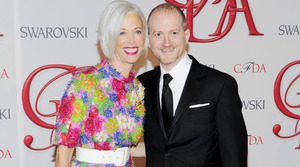 (NEW YORK) Having stepped on board at Bergdorf Goodman in May of last year, president Joshua Schulman, formerly CEO of Jimmy Choo and executive vice president of the Gucci Group, is already orchestrating grand plans for the 111-year-old luxury retailer and Fifth Avenue landmark. A whopping 40 projects are underway to revitalize the store, which will involve plenty of construction. However, the revamps to the 150,000-square-foot women’s space and the 40,000 square foot men’s space focus on major interiors overhauls more than expanded square footage.

What’s getting a makeover? For women, Chanel and Céline will be the marquee brands holding down the fort on the 57th and 58th Street sides. Not only that: Chanel will also triple in size and face the direct line of vision from Fifth Avenue. And how about the always-profitable shoe floor? Real estate for the well-heeled will increase by 20 percent, and designers like Gianvito Rossi and Paul Andrew have joined the roster. The third floor, which houses established ready-to-wear brands, will undergo changes like a revamping of the Saint Laurent and Balenciaga shops to reflect their creative directors Hedi Slimane and Alexander Wang’s visions for the brands, respectively. Also on tap for the RTW spreads of the store? Azzedine Alaïa will expand, and new shop-in-shops for Marc Jacobs, Stella McCartney, and Alexander McQueen will open.

And how about the gents? A new floor with high-end clothing will house shops for Ermenegildo Zegna and Brioni as the anchors, plus Ralph Lauren Black and Purple labels, Kiton, Isaia, and Attolini. Leather goods is a growing category and will be featured in a luxury accessories section on the main floor along with requisite fragrances, skincare and sunglasses. Also, a yet-unnamed bar and café on the second floor will open by the rotunda. Boys club power lunch, anyone? And finally, the first-ever Berluti in-store shop will debut, thanks to LVMH’s investment in the growing brand.

While Berluti and the café won’t open until later in the Fall, the rest of the updates are scheduled to be done by the first week of September. And if that sounds ambitious, think again: some experts are saying this $600 million in sales retailer is on a path to reach $1 billion. Seems unlikely that will hurt parent company Neiman Marcus Group’s rumored plans to go public. Looks like the good old-fashioned brick-and-mortars have still got it, non?
PAIGE REDDINGER