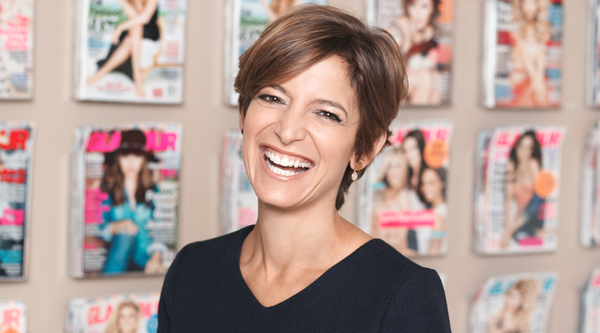 You’ve spent most of your career at Glamour. What still keeps you excited?
I don’t know how anybody could sit in my chair right now and be bored. Magazine publishing has changed so radically over the years. Our brand has become vibrant on so many different platforms. Our website just surpassed six million uniques in a month.

Glamour is all about this well-rounded life. Seems tough to juggle. How do you do it all?
Well, I don’t! I don’t think that any woman can answer that question without feeling like a complete impostor. All those women who you feel are leading perfect lives and firing on all cylinders? No one really is. There’s some event you’re supposed to be at, and a plant that’s supposed to be watered that’s dying as we speak. So, I’d like to pop that bubble a little bit. I hate that metaphor of juggling. Who wants to aspire to juggling? It’s this lonely, solitary activity.

So what’s a girl to do?
I remember hearing Cathie Black talk years ago about the crucial difference between acceptance and support from a husband for a woman with a high-power career. It’s one thing to have a husband who says he supports your career, and then is sitting on the couch as you’re running around like a chicken without your head. I know firsthand what it’s like to have real, true, bedrock support.

Besides your husband, who’s your ideal man?
You’re gonna get me divorced if I answer that question! OK, I’ve always had a thing for Matt Damon. He’s hot, smart, and good with kids.

What’s changed about this top-dog gig?
What’s demanded of editors in chief now is 180 degrees different from what it was even three or four years ago. You can no longer just see yourself as the person choosing the pictures and polishing the paragraphs. Being business-savvy is a requirement to this position.

Speaking of business, thoughts on Connie Anne Phillips as your new publisher, please!
She’s a great Glamour girl herself. She loves fashion, her living room is painted bright pink, and she once had a closet just for her shoes. She’s got incredible energy, passion, and enthusiasm.

How did you first cross paths with Connie Anne?
She came up to me in a restaurant years ago to tell me that she liked one of my editor’s notes. Naturally, I loved her. The fastest way to an editor’s heart is to compliment an editor’s letter!

Speaking of writing, why did you do the October cover story interview with Kerry Washington?
I basically elbowed all the other writers out of the way to get that one myself. I love Kerry and have known her for years, but like the rest of the world, I am completely crazy-addicted to Scandal. She made the conscious decision to step it up on the red carpet this year. Kerry’s very intelligent, and she expresses her political beliefs. She has a totally sacred private life, which I actually find incredibly refreshing. She is not the kind of person who will be live-tweeting her honeymoon, and I respect that.

How often do you interview celebrities?
Not often. It is logistically impractical and isn’t usually necessary. I have interviewed Angelina Jolie. I also had the privilege of interviewing the president, which hilariously got backlash from right-wing groups, who said it was trivial for the president to sit down with a woman’s magazine. However, it might’ve helped Romney at the polls to do so!

We hear Glamour’s got some sort of ’zine in the works. Do tell!
As one of our pre-anniversary events, we put together a ’zine of Patrick Demarchelier’s work from the Seventies at Glamour, which was actually the first magazine to give Patrick an assignment, in 1972. It’s such a wonderful era that’s so quintessentially Glamour, with Patti Hansen and Beverly Johnson looking happy, healthy, beautiful, and chic. We’re doing a limited-edition release, to be distributed during fashion week in Paris.

What’s your favorite hommes glossy?
Jim Nelson does an amazing job at GQ. I would subscribe to that magazine if I wasn’t able to steal it from the Condé Nast mail room.

Would you ever want to edit a men’s magazine?
There are probably many men that are much more qualified than I am.

Do you actually read other women’s mags?
I love reading the competition. Every once in a while, there will be one of those stories that I wish we’d done.

How is Lucy Danziger doing as your successor at Self?
Lucy does a great job. And she’s far fitter than I ever was!

Who’s one of your oldest industry pals?
Kristin van Ogtrop, who edits Real Simple—a totally different magazine than mine—is a good friend. We took a fiction-writing workshop at Bennington College together. More accurately, it was a summer wine-drinking workshop…at which I excelled. It was a small group of people, andLucky’s founding editor, Kim France, was also in that group. Somewhere, I have a photo of the three of us sitting on the bank of a lake in Vermont wearing ridiculous Eighties swimsuits.

Any other mag buddies?
I have a semi-regular dinner in Europe with Robbie Myers and Ariel Foxman.

Is your reader younger than she used to be?
No. Our reader is still in her 20s and 30s, but that generation has changed. They’re incredibly positive. It’s kind of shocking and wonderful! After all, this is the generation that lived through the recession and came of age in the shadow of 9/11. You’d expect them to be more pessimistic. They believe in their personal brands more than institutions.

How do you edit a glossy for this new 20- and 30-something demographic?
It’s easy for older editors to do a lot of hand-wringing over how to relate to this “more entitled” woman, who is all about herself and doesn’t want to pay her dues. If that’s your reader, that’s your reader! Maybe she believes in herself because the recession taught her that institutions aren’t necessarily more trustworthy. It’s an exciting time to edit for women.

What are your personal Dos and Don’ts for NYFW?
Do try to enjoy it! It makes me completely mental the kind of complaining that goes on during Fashion Week. You’ve kind of lost perspective on life if you’re complaining about being in Paris or Milan. Don’t be late to Marc Jacobs. And don’t forget to eat—even if it has to be in the back of the car.

You edit a women’s mag. Is Huma bad for women?
That’s a bit harsh! No. I think she is living her life.

Best of The Daily: Natural Beauty, As Told By Tata Harper

Best of The Daily: Lori Goldstein On Her Book 'Style Is Instinct'