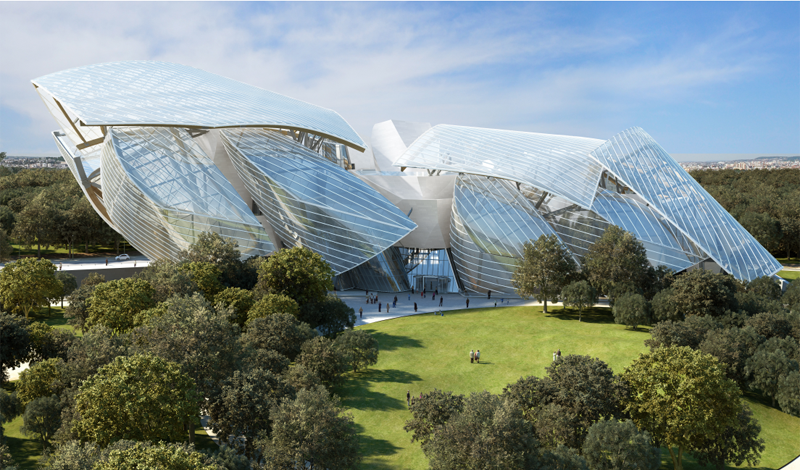 Bernard Arnault, LVMH’s chairman and CEO as well as a well-known art collector, has announced the opening of the Fondation Louis Vuitton, slated for October 27th. The Frank Gehry-designed museum will play host to the luxury conglomerate’s vast corporate art collection. The futuristic glass building will be located in the Jardin d’Acclimatation in Paris’ Bois de Boulogne area. The Fondation Louis Vuitton will focus on 20th and 21st century art in a 126,000 square foot space and contain 11 galleries.

While Arnault’s own art collection is widely known to be extensive, the museum will only feature the company’s corporate collection. Meanwhile, Arnault’s main competitor, François Henri-Pinault, opened the Palazzo Grassi in Venice in 2006, which display’s Pinault’s personal art collection. The French luxury magnate had originally planned to open a Tadao Ando-designed museum in his native country on the Ile Seguin in Paris in 2005, but the project was ultimately halted due to red tape regulations.

In addition to the permanent collection from LVMH, Arnault’s museum will also play host to temporary exhibitions and artist commissions, as well as events. Gehry’s architectural projects for the foundation will be the center of the museum’s inaugural exhibition, which will debut on October 20th, a week prior to the official opening (shortly before Gehry’s October 8th show at the Pompidou museum, the first European retrospective of the architect’s work). The inaugural exhibition will be open to the public for free the first three days by reservation ahead of the opening.

Vuitton also recently tapped Gehry to design a limited-edition handbag in its signature monogram canvas that is to arrive in stores in mid-October, as reported. Also participating in that project, dubbed “The Icon and the Iconoclasts,” are Karl Lagerfeld, Cindy Sherman, Rei Kawakubo, Christian Louboutin and Marc Newson.

$136 million at current exchange, the foundation represents one of LVMH’s biggest gestures of art patronage.