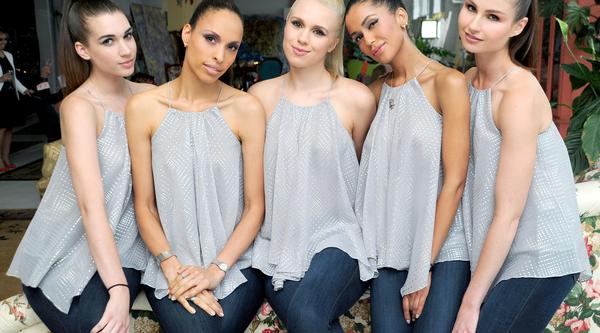 L’Oréal consultant and celeb makeup artist Billy B introduced the product (which officially launches in October) to the crowd. “The angled shape of the wand is not being weird for the sake of being weird. It’s a brilliant design that will forever change the way mascara works,” Billy B said in praise of the lash star of the eve. “It does the work for you! They’re going to put me out of a job! I can’t say enough about it.” But apparently, Slonem’s parrots thought otherwise, as their loud squawking interrupted him. Billy B wrapped his speech by thanking the birds.

A slew of beauty editors, including W’s Jane Larkworthy, More’s Genevieve Monsma, Better Homes and Gardens’ Ellen Miller, and Cosmo‘s Jessica Matlin, to name a few, took in the wild scenery and sipped on champagne and mint juleps. The latter of which was the Mississippi-born Billy B’s southern suggestion.

Of course, we had to ask: Who has the best lashes in the showbiz? “P!nk has really great lashes, and so does Beyonce. After years and years and years of all of those stars wearing false lashes, it’s actually a miracle that they have great lashes,” said Billy B. Another star with “amazing” lashes, according to Billy B? Sharon Stone. Fun fact: Having done the 55-year-old’s makeup for a decade he says she’s never had any work done. Bravo, Ms. Stone!

And how about the mascara? Billy B helped test and develop all the new product and says he would never recommend something he wouldn’t use on his own clients. “I know people think it’s bullsh*t, but it’s really the truth,” he said. “If you Google me and find stuff on me from 10 years ago, you’ll find I was using L’Oréal Voluminous mascara before I even worked with them. It really has always been my favorite mascara.” And ladies, we tried it. The man does not lie!
BY PAIGE REDDINGER

From The Daily Summer: Editors Work It Out!