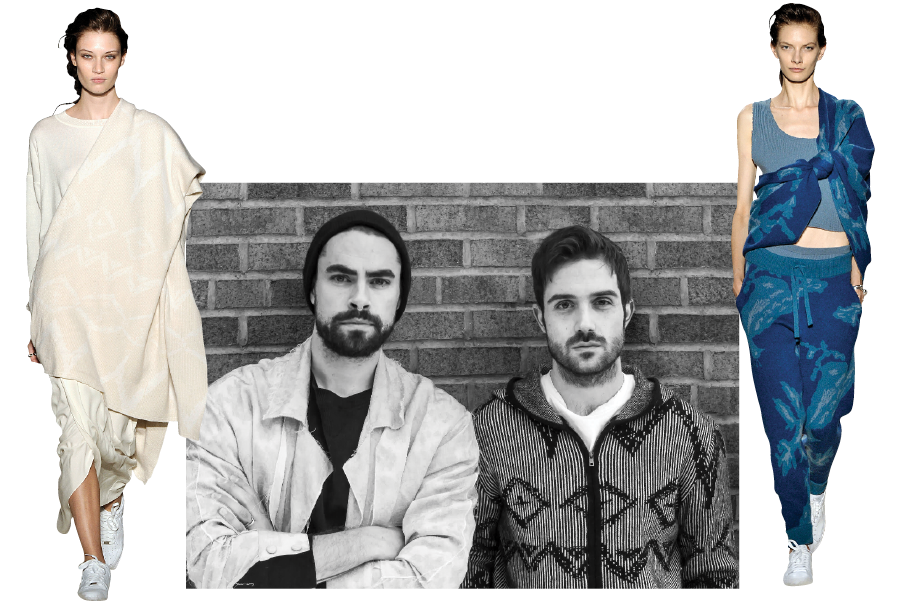 Bohemia Luxuria is all the rage at Baja East, John Targon and Scott Studenberg’s self-proclaimed “ambisexual” line that can be worn by both men and women and is designed to be tossed in a bag for a trip to Bali, Baja, or Berlin. From their Chelsea atelier, the Baja boys talk men in skirts, the true definition of ambisexual, and reveal some major news.

Call me a prude, but what exactly does ambisexual mean?
John Targon: A lot of people use the word androgynous, which we don’t really agree with. When a guy is wearing the clothes, it’s quite masculine, and when a girl is wearing them, it’s quite feminine. It’s just the matter of sizing and attitude, as well as styling.
Scott Studenberg: It’s all about the confidence and the person who is wearing it. I’m wearing a skirt right now, and I don’t look like a girl.

We love a man in a skirt.
Scott: A guy could wear it with Nikes and a T-shirt, and a girl could throw it on with an oversize sweater and some diamonds.

Are guys outside of fashion capitals like New York and London ready to sport skirts?
John: Yes! Scott is wearing one from our Pre-Fall collection, and it’s something you will see on the runway again. We did a skirt that looks, well, not necessarily like a kilt, but from the back, it appears to be tied around the waist. It’s not long and dramatic, per se. But our thing isn’t just to make it look like a skirt but like another piece of clothing. It’s like you just left the beach and are wearing it with Nikes, which is very city and athletic.

How did you two meet and start Baja East?
Scott: We’ve been best friends for a really long time, and we worked alongside each other with rivaling French brands. We always wanted to do something on our own, and then we finally got the balls to do it. We met at a gym class first. Maybe we need to come up with a new scenario, like it was a bathhouse in Paris or something.

A bathhouse? Scandale! Are you sure you’re not a couple?
John: We’re really not dating. We swear to God.

But you do live together.
Scott: We live and work from a two-bedroom apartment in Chelsea. We see each other all the time. We’re a true start-up!

Super cozy! How do people tell you apart?
John: When we do phone interviews, reporters always get our quotes mixed up.
Scott: John has a dancer’s body.
John: I’m shorter, paler, and sweeter.
Scott: I’m taller, darker, and meaner.

How do you feel now that you’re going into your second season?
Scott: There’s no way we would be in the place that we are in today if we didn’t learn everything from our old bosses, companies, and everyone we worked with. We both wanted to be more creative, and we’ve learned a lot on the sales end of things, as far as distribution, sales strategy, and merchandising a collection. It’s funny—you know, the design part was new to us, but we learned so much, and that’s been exciting and fun. When we design the collection we think of the salespeople on the floor, and who they are going to sell that piece to.

Baja East feels like a lifestyle brand. Where do you see your future?
John: Retail is one of our biggest dreams, especially the opportunity to create a space that showcases our ambisex concept and world of Baja East. Being New York boys, we have developed a particular love for this city and its development. We are excited to announce that we will open our first retail project in conjunction with Seaport Studios—it’s a concept shop that will showcase our Fall ’15 collection. We will curate the space and have some exciting ideas for the summer launch!